Detroit residents are being urged to avoid stores that sell Canada Goose jackets, which are lined with animal fur and stuffed with down. A new billboard urges them instead to opt for vegan outerwear.

The billboard, located near the city’s Moosejaw store – which sells Canada Goose jackets – shows a picture of a coyote alongside the words: “I’m a living being, not a piece of fur trim,” and “Boycott Canada Goose.”

Placed by PETA (People for the Ethical Treatment of Animals), the biggest animal rights organization in the world, the new billboard is part of its holiday campaign. The group intends to target shoppers throughout North America, advising them to steer clear of Canada Goose this festive season.

According to PETA, coyotes suffer for days in traps before they are killed for the fur trim on a Canada Goose jacket. Geese are victims too, one recent exposé by the group showed the animals being grabbed by their necks and crammed into cages at a Canada Goose down supplier. 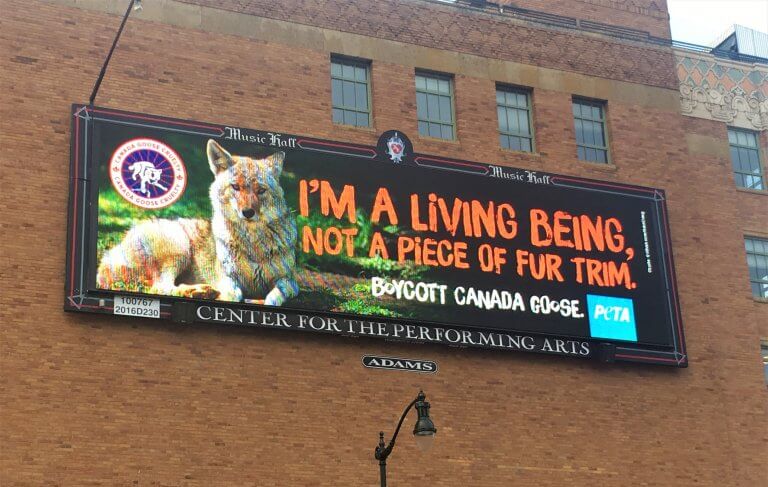 “No jacket is worth the pain and suffering of coyotes who struggled in traps for days or geese who were trampled and suffocated,” said PETA’s Executive Vice President Tracy Reiman in a statement. “PETA is upping the ante against Canada Goose and its retailers this holiday season until it agrees to drop fur and feathers and switch to warm, high-quality vegan materials instead.”

Named the ThermoBall Eco, the new range was a re-launch of the brand’s pre-existing range of ThermoBall jackets, made from non-recycled materials.

“The new ThermoBall Eco is the same award-winning lightweight down alternative jacket we have all grown to love, at the same price,” the brand noted in a press release. “It has the same product performance, but for one important difference: It’s made from recycled polyester fabric and recycled insulation.”

The new anti-Canada Goose PETA billboard will be located at 1699 Brush Street and will remain there throughout the holiday season.