At least, the actor in the upcoming Disney live-action “Aladdin” remake is. Mena Massoud is a successful Canadian actor and founder of the new plant-based promotion project, Evolving Vegan. Post “Aladdin,” Massoud is traveling North America to highlight the most intriguing plant-based chefs and the best vegan eats, sharing his experiences via Instagram along the way. The tour will also be documented in an upcoming lifestyle book to help others pursue a plant-based diet, one meatless or milk-less meal at a time. He took a break from his travels to chat with LIVEKINDLY about being a vegan actor, evolving as a vegan, and of course, sampling a continent’s worth of incredible vegan food.

Massoud’s passion for the vegan lifestyle is a relatively recent one; he only began his vegan journey three years ago. He said he and his friends fell into researching the animal agriculture industry, which led them to discover the negative impacts that animal products have on human health, the environment, and the animals. His transition was gradual, but over a period of time, he had completely cut out all animal-based foods.

This philosophy serves as the core of Evolving Vegan. He told LIVEKINDLY, “I wanted to create a community and lifestyle brand that encouraged people to evolve vegan. To move in that direction. To try their hardest and do their best to eliminate animal products from their life. To begin the process. I think there is a benefit anytime anyone reduces their animal intake and their environmental impact.”

A note from our Founder: “I started this project to share the stories of incredible restauranteurs, chefs, entrepreneurs and above all, fellow human beings who are trying to make a difference in the world. It’s not about labels, or eating habits or any of that crap. It’s about evolving in the right direction so that we can help save our planet, our bodies and our fellow living souls.” – @menamassoud

Massoud did not receive this kind of support during his own transition; he said he felt like there was no grey area. “It was apparent to me that many vegans made it seem like you were vegan or you were not vegan. There was no in between and no time to ask questions or actively transition. And if you were not a strict, 100% vegan then there was no room or time to waste on educating or accepting you into the community,” he explained.

Evolving Vegan is Massoud’s solution to this ‘elitist mentality’ among some vegans who are not accepting of those in transition. He encourages everyone to simply give ‘this vegan thing’ a try and ‘join the club,’ whether one is merely thinking about eating more veggies or cutting out meat a few days a week. He views this acceptance through a philosophical lens. “Being vegan…is a spiritual journey,” he believes. “If we’re adhering to a vegan lifestyle because we want to better our world and save the animals, then why on Earth would we not show that same love and compassion to our fellow human beings who want to join in on a great cause?”

The project is still in its infancy, but Massoud assured LIVEKINDLY that “people are responding very well…especially non-vegans.”

Switching gears, Massoud went on to discuss his personal endeavors and life as a vegan actor. To keep in shape, he believes one should, “eat as healthy, clean and simple as you can without driving yourself insane.” He enjoys ethnic cuisine for its ability to “take you on a journey,” but he’s also not adverse to a classic vegan cheeseburger. He reasoned, “Even if I’m craving a juicy, greasy burger, and I have one from say, Monty’s, I’m still eating something made completely from plants. Yes, it may not be ‘healthy’ but it is healthier, better for my body and for the planet than a beef burger.”

He was hard-pressed to name his favorite meals so far on the Evolving Vegan tour, as he claims each city and restaurant is phenomenal in its own way. However, he did acknowledge Donna Jean in San Diego for its ‘artistically culinary food,’ Souley Vegan in Oakland, Calif. for outstanding southern comfort food, and Pena Pachamma in San Francisco for its vegan Bolivian food. “Never would I have thought there would be that much variety in the vegan world when I first turned plant-based,” he wondered. 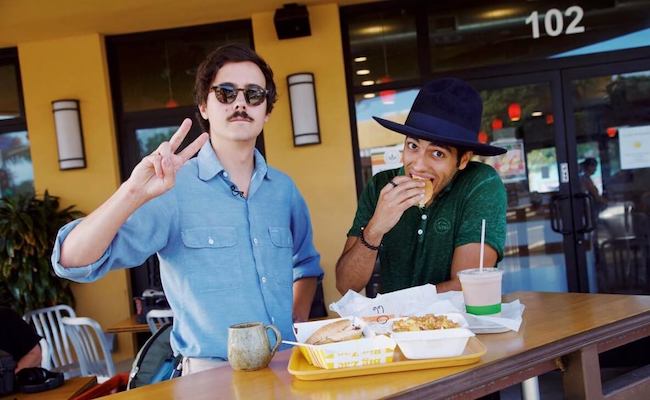 When on set, he relies on both craft services and bringing his own food to maintain a healthy vegan diet and fuel his 14 hour days, plus the grueling workouts that follow. He said that his fellow actors often show interest in his lifestyle, and many are amazed by what he is able to accomplish day in and day out. He’s been asked, “How can you work a 14 hour day and then hit the gym, 6 days a week on a vegan diet?” Massoud reasoned, “I think people are just surprised. The image they have in their heads is that being vegan or plant-based is somehow inferior health-wise. Again, it’s our job as people of that community to break down those stereotypes.”

Although both work and Evolving Vegan mandate dining out, Massoud is an enthusiastic home cook. “Hell yes, I cook!” he exclaimed. In line with his love for culturally diverse dishes, his specialties include peanut tofu stir-fry on rice and a red wine tomato bolognese tossed with gluten-free pasta.

When asked about a childhood food memory, he recalled Sunday morning brunches at home with his parents and two sisters. The family would feast on accidentally vegan dishes including fava bean stew, falafel, hummus, tahini, baba ganoush, potatoes, rice, and salads.

The Evolving Vegan book features “the best plant-based eateries around North America,” in addition to recipes submitted by each of these locations. In the meantime, Massoud encourages vegans, omnivores, and everyone in between to follow his journey on Instagram, InstaStory, and IGTV for photos and mini-episodes of North America’s best vegan eats. And Massoud also plans to use the Evolving Vegan platform to launch a free vegan community this summer.