Reducing consumption of red meat, processed meats, and dairy can drastically reduce the risk of certain forms of cancer, according to new research released by the World Cancer Research Fund (WCRF). The non-profit cancer prevention research organization released its findings in its third expert report titled “Diet, Nutrition, Physical Activity, and Cancer: a Global Perspective,” which researchers have dubbed the “blueprint” to beat the disease.

Compiled by experts in the cancer research space, the report is updated once every decade and is the world’s largest, most authoritative, and up-to-date source of scientific research on cancer prevention and survivorship through diet, nutrition, and physical activity. The latest report is based on research involving more than 51 million people and findings are divided by exposures, types of cancer, and cancer prevention recommendations.

According to the report, regular consumption of red meat, processed meat, Cantonese-style salted fish, and dairy products increases one’s risk for various forms of cancer. Red meat’s cancer risks include colorectal, lung, pancreatic, and nasopharyx. Processed meats like bacon increase risk of colorectal, lung, stomach, pancreas, and esophagus. Grilled or char-broiled meat and fish can increase the risk of stomach cancer while dairy products put one at risk for prostate cancer. Experts recommend eating moderate amounts of, if any, red and processed meat. Conversely, high-fiber, plant-based foods like grains, legumes, fruits, and vegetables can all protect against the risk of all forms of cancer caused by meat and can even protect against breast cancer. 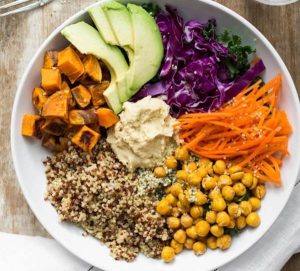 The WCRF’s cancer prevention recommendations, which come from the latest report and from conclusions drawn by an independent panel of experts, recommends a number of lifestyle choices that people can take to reduce their risk of cancer. Eating primarily whole, plant-based foods can be one of the best ways to prevent cancer. “Our evidence suggests the greatest risk is for people who consume no or hardly any vegetables or fruit,” said Dr.Rachel Thompson, WCRF’s Head of Research Interpretation.

Fast food and red and processed meats, on the other hand, should be limited or avoided due to evidence that points to the increased risk of cancer from processed meat consumption. The WCRF’s experts back up the evidence against red meat’s health risks.

“The evidence on processed meat and cancer is clear-cut. The data show that no level of intake can confidently be associated with a lack of risk. Processed meats are often high in salt, which can also increase the risk of high blood pressure and cardiovascular disease,” said Professor Martin Wiseman, WCRF International’s Medical and Scientific Adviser.

By following avoiding processed meat, red meat, and dairy, as well as other factors like avoiding sugary drinks and large quantities of alcohol, and committing to regular exercise, the WCRF claims that one can reduce the risk of cancer by 40 percent.