In an effort to combat childhood obesity, doctors in the UK hope to see fast-food restaurants banned from within 400 meters of every public school in the country.

Reported by The Telegraph, the measure is being pushed by The Royal College of Paediatrics and Child Health. This professional body of pediatricians provides postgraduate training for doctors, organizes campaigns and new research for national and global child health, and develops new clinical guidelines and standards based on current medical understandings. The college hopes for fast-food restaurants to be banned from the immediate vicinity of schools this summer, when the government is due to update its UK childhood obesity strategy. According to recent data released by the government, nearly one-third of children ages 2 to 15 are described as “overweight or obese” as defined by their body mass index (BMI).

“Kids are coming out of school hungry and finding themselves surrounded by cheap chicken shops, chip shops and other types of junk food,” said professor Robert Viner, president of the college. “This just wasn’t the case 20 or 30 years ago. People tend to eat what’s in front of them and we need to make it easier for children to make the right choices.”

According to a recent study published in the British Medical Journal, exposure to fast-food outlets near home, work, and commuting environments was associated with greater odds of obesity. The study concluded that “government strategies to promote healthier diets through planning restrictions for takeaway food could be most effective if focused around the workplace.” Doctors claim that making fast-food less accessible may have a positive impact on the overall health of students as well. 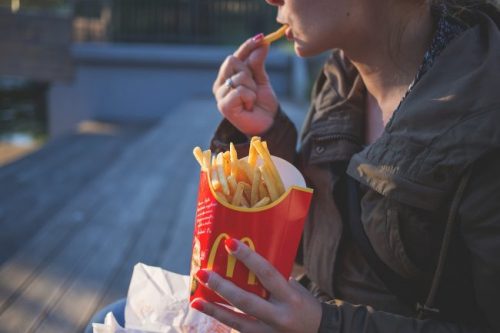 Numerous peer-reviewed studies highlight that a diet heavy in meat and cheese, which most fast-food restaurants center around, increases one’s risk for a number of health issues such as heart disease, high blood pressure, type-2 diabetes, certain types of cancer, obesity, and more. Conversely, studies show that a diet consisting of whole, plant-based foods is one of the healthiest ways that one can eat.

Viner is not alone in the fight for children’s health in the UK. The Telegraph reports that around 20 local authorities within the country have already enacted restrictions against UK fast-food restaurants near schools, but report that they lack the power to put stricter measures in place. Last year, London’s Mayor Sadiq Khan announced plans to ban new fast-food restaurants from opening within 400 meters of London schools.

“We need to be prepared to have difficult conversations and to make every contact [with health services] count in the fight against obesity,” Viner said.“We have to take a leap of faith to protect current and future generations.”

Next month, the Commons health and social committee will be open to the public for hearings regarding priorities for action on childhood obesity.