The co-director of “Cowspiracy” and “What the Health” has been hard at work following these two documentary hits. In August, Keegan Kuhn premiered his new solo project, “Running For Good.” The film tells the story of vegan ultramarathoner Fiona Oakes, a powerful force of an athlete who, despite her extraordinary accomplishments, has received little media recognition. The compelling documentary is now available to stream online.

Oakes is a 49-year-old woman who operates a farm sanctuary with her husband in Asheldham, UK. She has a quiet, hard-working, and overall unassuming disposition, which serves as a complete juxtaposition to her reputation as an elite distance runner. Despite a crippling adolescent disease that left her without a kneecap, Oakes is a multi-world record holder in marathon running.

One of her most prominent accolades is the fastest woman in the world to run a marathon on each continent. She also holds three marathon world records and five course records around the world. The film touches on her vast acclaims, but all of it is woven into the greater narrative, which documents her experience racing the formidable Marathon Des Sables (MDS), also known as the “toughest footrace on Earth.” 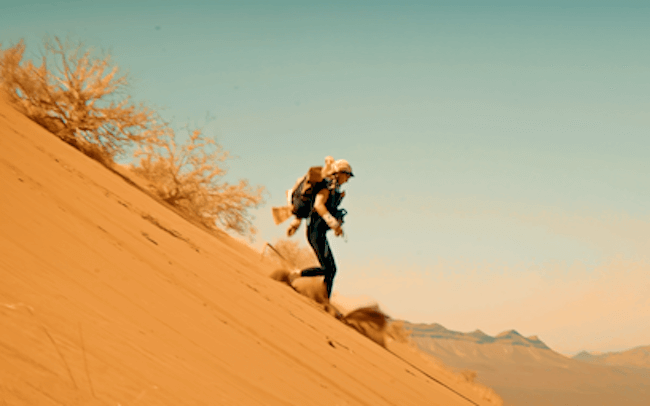 Oakes embarks on the MDS for the simple reason of raising awareness for animals. It’s the only reason why she runs. In the film, she states that she does not particularly enjoy running; she’s not in it for the fame, the camaraderie, or the runner’s high. She’s in it for the animals.

Elisabet Barnes, a two-time winner of MDS, said in a press release, “Fiona is a truly remarkable athlete and human being. She has defied all odds to become a world record-breaking runner despite a horrific injury. Her sense of purpose is so strong that nothing can stop her. Yet at the same time, she is one of the most humble and selfless people I have met.”

MDS is a six-day self-sustained endurance race across the Sahara Desert. Runners must trek through 250 km (roughly one marathon per day) of unpaved sand, rock, creek beds, and steep hills. The film showcases both the beauty and treachery of this desert landscape, checking in on Oakes as she makes her way across the miles of unforgiving terrain.

“Running for Good,” is available to stream for free from October 11 – 14, after which it will be available for purchase. To watch the film, click here and use the code FREE.