In an interview with Stephen Colbert on The Late Show With Stephen Colbert, entertainer Donald Glover discussed his career in music, writing, comedy, and his affinity for Girl Scout cookies. Specifically, the vegan varieties.

During the last segment of his interview, Colbert showed a viral homemade video of a young girl, Charity Joy, marketing her Girl Scout cookies to the tune of Glover’s hit sultry song, “Redbone.” The original lyrics are far from Girl Scout-appropriate, but Charity Joy changed the words to highlight her Thin Mints, Tagalongs, and Trefoils. After watching the clip, Colbert asked Glover if he was hungry for Girl Scout cookies, and he responded, “Yes I’d actually really like to buy some from her.”

On cue, Colbert brought out Charity Joy and her father from backstage, proudly donning her Girl Scout vest and carrying a cookie order form. As Glover scanned through the cookie options, Charity Joy shyly said she was a big fan of the entertainer. Glover read over the order form, which noted the Girl Scout’s goal to sell one hundred and thirteen boxes of cookies. “I’ll take ‘em all,” Glover announced. 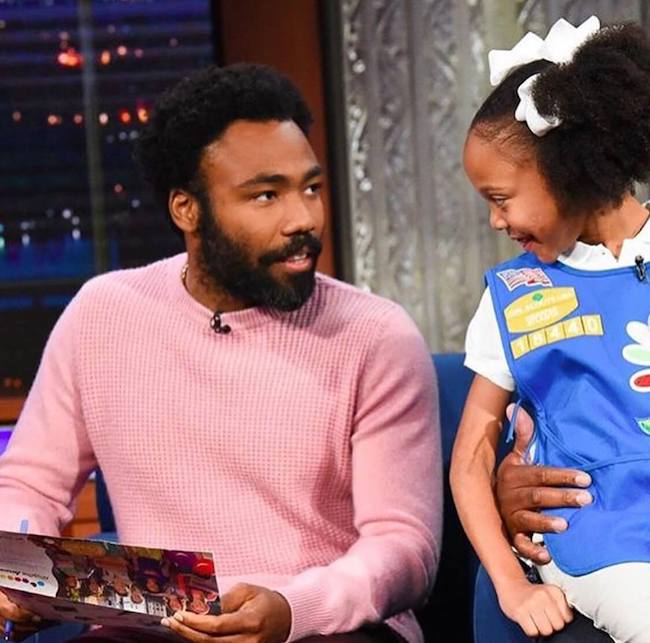 The discussion shifted to what kind of cookies he should buy. Colbert suggested Thin Mints. Glover agreed, “Obviously Thin Mints. You can put them in the refrigerator.” He made an aside to Charity Joy, saying, “You know they’re vegan.”

Colbert just so happened to have a large basket of Thin Mints behind his desk. Charity Joy enthusiastically began handing the boxes out to the audience members as the segment concluded.

Glover is not vegan, but as a comedian and writer, he must stay in the know of what is on trend. With five vegan varieties out of the twelve cookie options, vegan Girl Scout cookies are certainly buzz-worthy. In fact, the highest selling flavor, Thin Mints, is vegan. Other cruelty-free options include Peanut Butter Patties, Lemonades, Thanks-A-Lot, and Girl Scout S’mores (the chocolate-covered variety).

Cookie season is still in full swing. Support a Scout and find vegan options near you by visiting the How to Buy page on the Girl Scouts website.