Arguably one of the most impactful documentaries of the modern era, What the Health, is coming to daytime TV. In an upcoming episode of Dr. Oz, WTH star and director Kip Andersen along with plant-based doctor and warrior against animal testing, Dr. Neal Barnard, will be having conversations which are sure to get people talking.

It’s no surprise that Dr. Oz would present this on his show as he’s recently shown support for plant-based lifestyles. In an August interview with V-103 Atlanta, Dr. Oz came out strong for veganism, stating that older people often incorrectly believe that their best years are behind them because of the negative effects of a poor diet. He firmly states that a vegan diet is known to help people lose weight, reverse diabetes, and live longer. He says that only we have the power to change our diet. 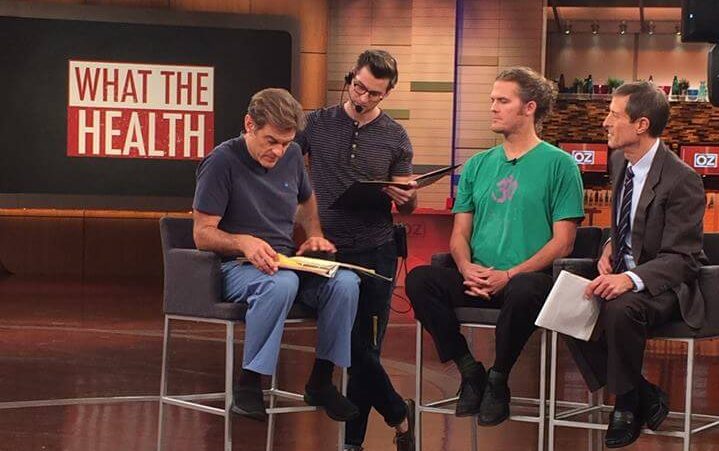 These sentiments are echoed in WTH and are reinforced by Kip Andersen’s many interviews in the film — within which he rarely gets any direct answers at all. In fact, his interviews suggest throughout most of the film that the pharmaceutical industry works hard to keep us from knowing the realities cited again, just a month ago, by Dr. Oz.

This pair will be joined by Dr. Neal Barnard, a clinical researcher who was featured in WTH and has spoken out against animal testing for years now. Dr. Neal Barnard is also known for his incredible research into diet and disease prevention and, as the President of the Physicians Committee for Responsible Medicine is also responsible for running many successful nutrition campaigns across schools and medical centres in America.

The episode is set to air tomorrow and you can check the show’s schedule, for your local time For a behind the scenes look at this upcoming episode, check out the video below by YouTuber Brett Cap. Whatever you do, don’t miss the episode. If it’s impact is even a fraction of the documentary, it’ll definitely be the topic on everyone’s lips.