An increasing number of consumers are recognizing how eating animal products fuels climate change by exacerbating the greenhouse gas emissions released into the atmosphere from the animals and supporting industries. These foods are also  a primary culprit causing “dead zones” across the world’s oceans.

A dead zone located in the Gulf of Mexico is one of the largest ever measured. The Baltic Sea in Europe has also been impacted by an expansive dead zone. Mexico’s impacted area reaches over 8,776 square miles (22,730 square kilometres) — comparable to the size of New Jersey, or twice that of Sydney, Australia.

Dead zones are uninhabitable parts of the ocean where entire ecosystems die off, caused by a process called eutrophication wherein runoff from agriculture — animal waste and crop fertiliser, etc —  is carried from farms to waterways during the hydrologic cycle.

Fertiliser that enters the ocean is packed with phosphorus and nitrogen. Although some nutrients are essential to sustaining life, too many of them in one given volume lowers the amount of oxygen available. These excessive nutrients feed the growth of algae and phytoplankton (microscopic plants) populations — also known as “algal blooms.” As the high numbers of these species die-off, they sink to the bottom of the ocean and are consumed by bacteria on the seafloor. Bacteria require large amounts of oxygen to do so. 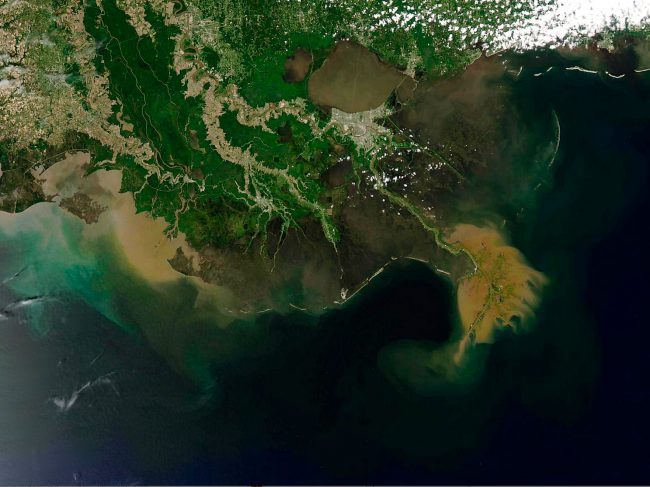 Low amounts of oxygen on the seafloor changes the density between the opposite vertical surfaces of a given block of ocean, such as the Gulf of Mexico. When this occurs, the ocean is prevented from mixing and therefore oxygen levels cannot be replenished to deprived spots.

In a circumstance known as environmental hypoxia, the seafloor becomes so low in oxygen that life can no longer be supported. Any life that is able to evacuate the affected area when it enters such a state will do so, however, everything aground such as plant life and coral suffocate in the lack of oxygen. Further, dead zone affected species have slowed population regeneration for years to come.

Not only are farmed animals killed for food, but as an extension, ocean life is too. In the words of Jeremy Berke for Business Insider Australia, “[t]here’s a long way to go [in restoring a natural balance to affected ocean dead zones], but the best way you can help is to eat less meat.”