Star of the hit medical drama “Grey’s Anatomy” and animal advocate Ellen Pompeo has partnered with online fundraising platform Omaze in order to raise money for wildlife conservation. According to the website, fans can donate to win an opportunity to meet with Pompeo for themselves and one guest, then visit a wildlife sanctuary in Los Angeles. Winners will be provided with a flight to Los Angeles and accommodations in a four-star hotel.

“[Y]ou’re going to learn how to save a life with Ellen Pompeo! (And by life we mean wildlife.),” the website says. “You and your luckiest pal will meet Ellen at a wildlife sanctuary, where you’ll learn all about exotic animals in a place committed to their healing and safety.”

The fundraiser will benefit the Ellen DeGenerous Wildlife Fund, a charity that was founded to “support global conservation efforts for critically endangered species.” The first initiative of the fund was building a permanent campus for the Dian Fossey Gorilla Fund, a gorilla conservation effort that aims to protect endangered mountain gorillas in Rwanda. The campus acts as a home for scientific research to aid dwindling gorilla populations and as a resource center to help people living near gorillas co-exist. 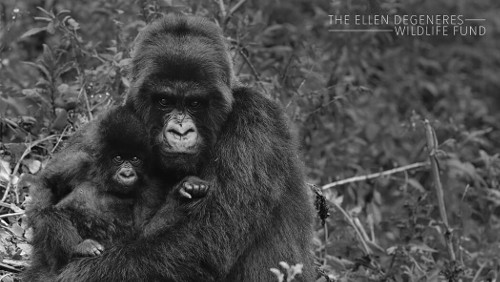 After the sanctuary visit, the winner and their guest will be treated to a picnic lunch with Pompeo.

In a 2016 tweet, Pompeo herself said: “For the record I am not completely vegan but my eyes have been opened and I eat ALOT less animal products change doesn’t have to be extreme.”

The titular star of “Grey’s Anatomy” indicated that she has been making a conscious effort to eat more plant-based foods and is said to enjoy lunch at Truly Vegan in Hollywood. In addition to that, PETA notes that she was one of many celebrities to celebrate the demise of Ringling Bros. Circus, which was notorious for its use of wild animals for entertainment. “Grey’s Anatomy” co-star Sandra Oh is a well-known vegan.

Pompeo isn’t alone in standing up for endangered gorillas. Last month, actor Dwayne Johnson appeared on “The Ellen Show” to announce that he had “adopted” a gorilla in order to supper the Dian Fossey Gorilla Fund as part of a promotion for his latest role in the movie “Rampage.”