Dale Vince — the founder of vegan energy company Ecotricity and chairman of carbon-neutral football club Forest Green Rovers (FGR) — is on a mission to get plant-based foods into UK schools.

With the opening of a brand-new factory named “The Devil’s Kitchen” in Gloucestershire, the entrepreneur hopes to disrupt the school catering industry, which currently churns out one billion meals a year.

The range of products produced at the new factory — including plant-based burgers and veggie balls — will be under the Little Green Devils label, initially launched by FGR in summer 2018.

Vince said in a statement at the time, “We’d like to be in every school at least once a week because that would be a lovely thing to do. It’s about getting kids to eat healthier foods that can be vegan [and] gluten-free.”

He added, “It’s super healthy but also has some football heritage which may encourage young kids to get involved.” 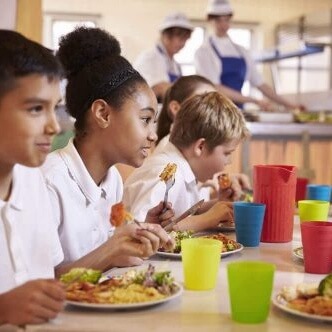 All the meals will be free from palm oil, MSG, and artificial ingredients, as well as the 14 major food allergens, according to Vegan Food and Living.

Vince’s new venture builds on previous successes from other plant-based organizations, such as ProVeg. Last year, as part of its School Plates programme, the nonprofit worked with primary schools across the UK to convince them to offer meatless meals.

More than 100 schools partnered with the organization, implementing meat-free Mondays as well as daily vegetarian options. “Schools can play an integral role in encouraging their pupils to establish healthy eating habits from early on,” ProVeg stated.

Dr. Melanie Joy — author of Why We Love Dogs, Eat Pigs, and Wear Cows and co-founder of ProVeg International — added, “If we could enhance pupils’ health, help protect them from killer diseases in the long term, reduce our impact on the environment and save you money all at the same time, why wouldn’t we?”

Around the world, schools are becoming more vegan-friendly. In California, a new proposed bill — co-sponsored by PCRM (Physicians Committee for Responsible Medicine) — would offer funding for plant-based school meals across the state.

He continued, “Not only do these foods help students stay focused and energized in the classroom today, but they also reduce long-term risk for heart disease, type-2 diabetes, obesity, and other chronic diseases.”