So far in 2017, 117 environmental defenders have been killed. All over the planet, people dedicating their lives to defend and protect the planet are being murdered in order to silence them.

Environmental documentary, Cowspiracy notes that “[m]ore than 1,100 activists, small farmers, judges, priests and other rural workers have been killed in land disputes in the last two decades”

But the issue is even more serious and wide-spread than many realise. From indigenous land rights activists in Brazil to wildlife rangers in the Democratic Republic of Congo, environmental workers are coming under serious attack.

While many of us find ourselves more aware of environmental issues and willing to work to combat them, the death toll for defenders has been rising. It has never been deadlier to oppose companies who benefit from damaging the environment. 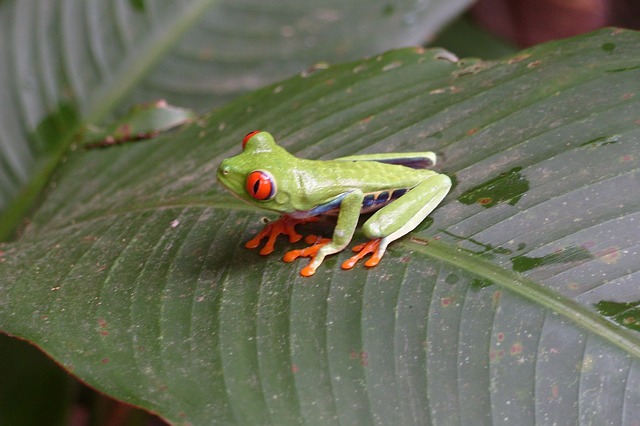 In July 2017 alone there were four known deaths. Ademir de Souza Pereira, a local leader of League of Poor Peasants, was killed at a car wash in Brazil; Sharath Madivala, an activist against sand mining, was stabbed in India by as-yet unidentified assailants; Raimundo Mota de Souza Junior, a leader of the Movement for Poor Farmers of Bahia was killed by four gunmen in Brazil; Dudunyabo Machongani Celestin, a ranger killed in line of duty in Virunga National Park in the Democratic Republic of Congo. The list of deaths from the year is extensive, and deeply disturbing.

The most dangerous country for environmental defenders is Honduras, with more killings per capita than anywhere else in the world; Brazil follows, a country which claimed the lives of 132 land and environmental defenders since the beginning of 2015. Many of the killings were of those opposing illegal logging in the Amazon. The Philippines is the next worst culprit, with 75 deaths. 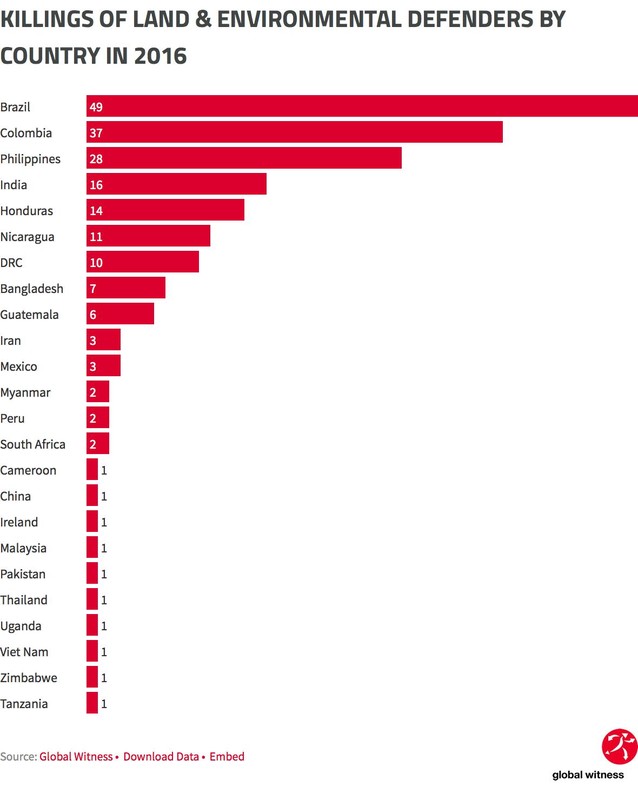 It is even feared that these incidents may not be confined to these countries. Developed countries are increasingly formulating methods to suppress activists; given the reasons President Trump is giving environmentalists to oppose his regime, this is a real concern.

Researchers are warning that the upward trend of murders will only continue if governments and businesses fail to act. The mining industry in particular is driving the violence, causing 33 deaths last year relating to anti-mining activities.

Key perpetrators also include agribusiness, hydroelectric dams and logging, according to Global Witness in their new report exploring the murders. The most common victims also tend to be indigenous communities. It is a battle between local people, dependent on the land to survive and risking everything to protect the environment, and money-driven multinationals, paramilitaries and even their own governments. A lack of prosecutions means identifying those responsible is rare. Worse, strong evidence exists that the police and military were behind at least 43 killings in 2016, with private actors such as hitmen linked to 52 deaths.

And the attacks on activists are brutal: in March 2016 for example, high profile environmentalist Berta Cáceres was assassinated in the middle of the night as she slept in her own home.

Murder is not the only tool used to silence activists: arrests, sexual assault and aggressive legal attacks are also rife. Jakeline Romero, a Colombian land defender, said “[t]hey threaten you so you will shut up. I can’t shut up. I can’t stay silent faced with all that is happening to my people. We are fighting for our lands, for our water, for our lives.”

Ironically, it is the activists who are portrayed as the criminals. When an arrest is made, they face excessive criminal charges and aggressive civil cases brought by the governments and organisations wishing to silence them.

Countries such as the USA are not only failing to stop these outrages, but are making them worse. The US continues to fund Honduran industry, despite concerns raised in Congress about the country’s dubious human rights record. The US embassy has been promoting increased investment in Honduras’ extractive industries, for instance, with US mining giant Electrum already planning a US$1 billion investment.

Change is needed, now. We must demand justice for these activists, and continue to defend the planet – if those who care about the environment are silenced, corrupt governments and corporations have won, and this cannot be allowed. It is, literally, a matter of life or death.

Billy Kyte, a Global Witness campaign leader, said the following, which summarises the gravity and inhumanity of the situation:

“We have documented countless chilling attacks and threats, including the savage beating by soldiers of pregnant women, children held at gunpoint by police, arson attacks on villagers’ homes, whilst hired assassins still wander free among their victims’ communities.”