British frozen food supermarket Farmfoods has been slammed for its cheap kebab meat product, with many ridiculing the item on social media.

The product – called Kebab Meat and Cheesy Chips – costs £1 and consists of a handful of chips, grated cheese, and cut rectangles of doner kebab meat enclosed in a metal tin. The item has been compared to dog food and said to look like “offcuts of a carpet,” Brinkwire reports. One social media user commented, “I’d rather eat the tin.”

One user described the item, “If Jeremy Kyle was a dinner,” likely referring to the fact that the food is cheap, of poor quality, and tasteless, like Kyle’s ITV show, “The Jeremy Kyle Show.” In the series, Kyle, aka Jezza, often facilitates confrontations between families and couples about their personal issues. The host has been criticised for being insensitive and judgmental. 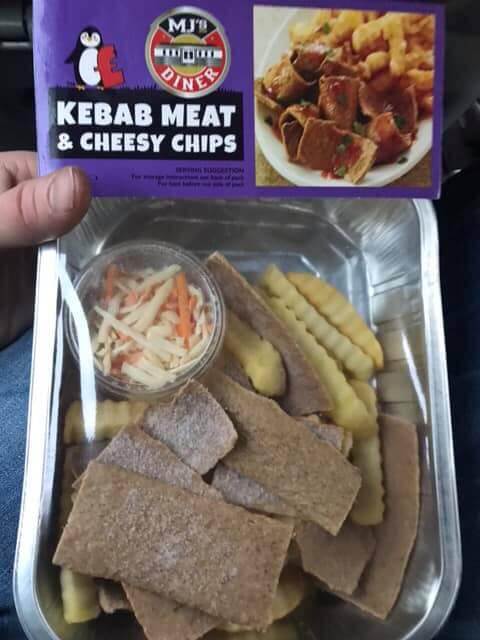 Another person said: “This exists and people lose their sh*t over a sausage roll that has no meat in it.” Days ago, Britain’s largest bakery chain Greggs introduced a vegan version of its famous sausage roll. Whilst the product proved popular – selling out in stores across the UK and receiving rave reviews from those who tried it – others were more critical. In particular, Piers Morgan, a common critic of plant-based, cruelty-free lifestyles, was not a fan of the launch, ridiculing the sausage roll on Twitter. Greggs was quick to shut down the journalist and Pizza Hut, which also just released a vegan option, joined in to support its fellow vegan-friendly food chain.

The new vegan products were inspired by the rising demand for meat-free foods. More people than ever are adopting plant-based diets for environmental, animal welfare, and health reasons. A growing bank of research is finding links between meat – as well as dairy and other animal products – and disease.

A study from later last year found that eating red meat could increase the risk of heart disease by 1,000 percent more than a plant-based diet. Research has also connected red and processed meat to liver disease and kidney disease. In contrast, a plant-based diet is said to be the most effective route to optimal health.