Veganuary — a month-long challenge for non-vegans to eat vegan — is nearing its end. And the dairy industry seems to want in on the cleverly named campaign trend. It has launched a pro-dairy milk campaign called “Februdairy.” While the campaign intended to bolster confidence in and support of the dairy market (and counteract Veganuary), it has instead cast a spotlight on the industry that it would have much rather avoided. Vegans have taken to social media in to ensure the industry is exposed and many have even used the campaign to announce their switch from dairy to plant based milks.

Many people, understandably, are under the impression that animals on factory farms live similar lives to those owned by family farms. These realities are, radically, not the same. Managing twenty or so animals is not the same as managing thousands at once. Dairy cows are not gently milked and allowed to roam in the sun and play with friends on factory farms. There is no sunshine or happiness where this milk comes from — there is, however, lots of pus and blood.

Dairy cows are forcibly impregnated, over and over again, separated from their young after carrying them for nine months, and eventually slaughtered when they can no longer continue the cycle. Much like a humans, cows only produce milk for their young.

It’s simply not formulated for adults or animals from other species (including humans). People commonly identify as lactose intolerant, but really, humans just aren’t baby cows. 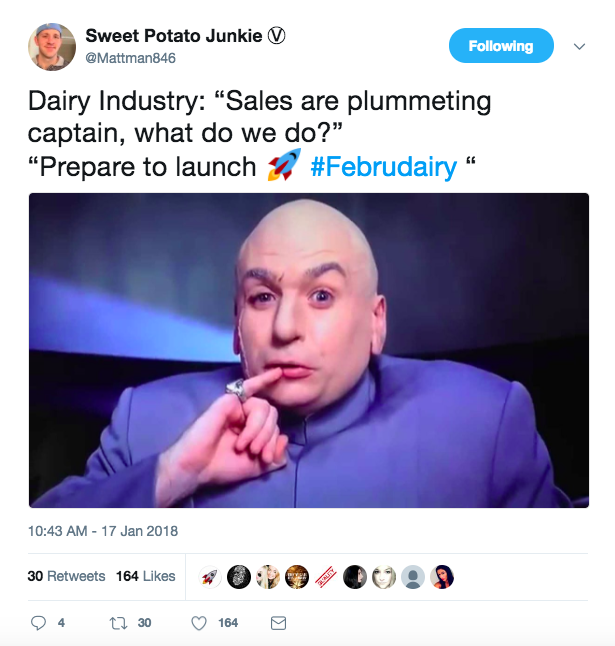 While Veganuary may be coming to an end soon, you can continue cutting out animal products by switching to plant-based milk, cheese, butter, and ice cream. Februdairy is not a campaign about tradition nor is it about what’s good for your health… it’s an ad campaign to bring up sales. Off the vegan powered year we just had, Februdairy’s chances of flipping the market are low. For the taste, for their health, and for the animals, people are quitting dairy and not looking back.