NuVegan’s President, Vernon Woodland, told Richmond Magazine that the goal of his concept is to change perceptions surrounding vegan cuisine. “[People] think salads, think of veggies, and even though everything is plant-based, there’s more to it than just that.”

Woodland continued, “We want to cater to the transitional eater. You can get that comfort food, or you can get real healthy and go raw or juice. We wanted to create something that meat eaters would want to eat and come up with recipes that fit the alternative, but also cater to the vegans that exist.” 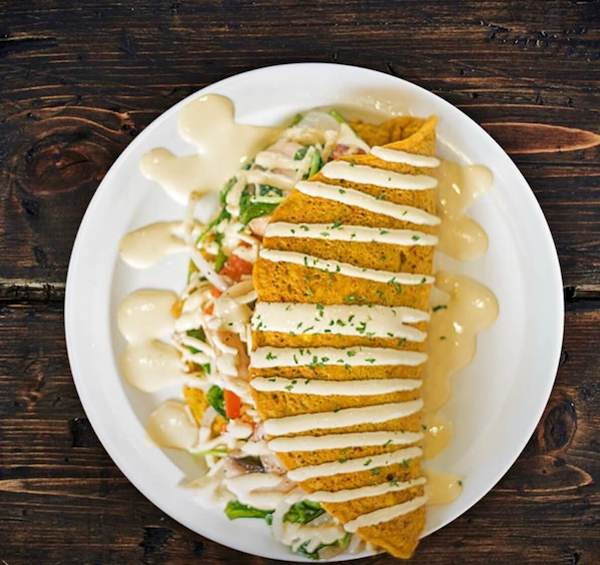 True to Woodland’s word, the extensive menu offers something for everyone, from raw foodists to comfort food-cravers. The wide selection of entrees and sides reflect a southern style of cooking and include cheesy grits, collard greens, okra and tomatoes, candied yams, various burgers, and of course, fried chicken and biscuits. The cafe also offers desserts and freshly pressed customizable juices.

The small franchise began as a single brick-and-mortar in 2009 in Washington, D.C. It launched a DC food truck in 2013, and a second location in College Park, Md., in 2015. The idea for the Richmond location was sparked by the now-owner Jason Jackson after trying the vegan crab cakes on the food truck menu.

Although NuVegan is the first fast-casual plant-based restaurant in the city, Richmond has proved to house a vibrant vegan community. A monthly vegan food truck court hosts regular pop-ups at Hardwoody Park Craft Brewery, featuring local mobile favorites Go Go Vegan Go, Goatocado, The Hungry Turtle, and Mean Bird. The capital has also hosted the Richmond VegFest for the past 16 years, inviting vegan small businesses, food trucks, and vegan-friendly restaurants to participate in the plant-based food celebration. Richmond Magazine also noted that many of the area’s established restaurants have added vegan and vegetarian options to its menus as customers continue to ask for plant-based modifications.