Follow Your Heart, an established vegan product line and cafe, wants to make vegan breakfast even more delicious and convenient. The company is giving the Natural Products Expo West 2018 attendees an exclusive taste of two of their new pourable products: Liquid VeganEgg and Rocket Cakes (a pancake mix). Both products are scheduled to hit the market in June 2018.

These two new products showcase the latest innovation from Follow Your Heart. The company reformulated its popular VeganEgg into a pourable consistency, creating Liquid VeganEgg. The product is fridge stable; all one does is “pour and sizzle,” no mixing required. In a similar vein, the Rocket Cakes pancake mix is also ready-to-use. The mix is vegan, allergen-friendly, and gluten-free. Follow Your Heart promises, “the tastiest, healthiest, pourable pancake batter [that creates] fluffy, delicious pancakes or decadent waffles with ease!”

Now a leader in the push for more plant-based products, Follow Your Heart began as a humble cafe in the Los Angeles suburb town of Canoga Park in 1970. Founders Bob, Spencer, Michael, and Paul served simple vegetarian soups and sandwiches in a former butcher shop, which they converted into their cruelty-free cafe. To accompany their best-selling sandwich, the Avocado, Tomato, and Sprouts, the four men invented the first egg-free, vegan mayo – Veganaise. Customers started asking to take it home, and from there, the cafe launched into the company it is today. 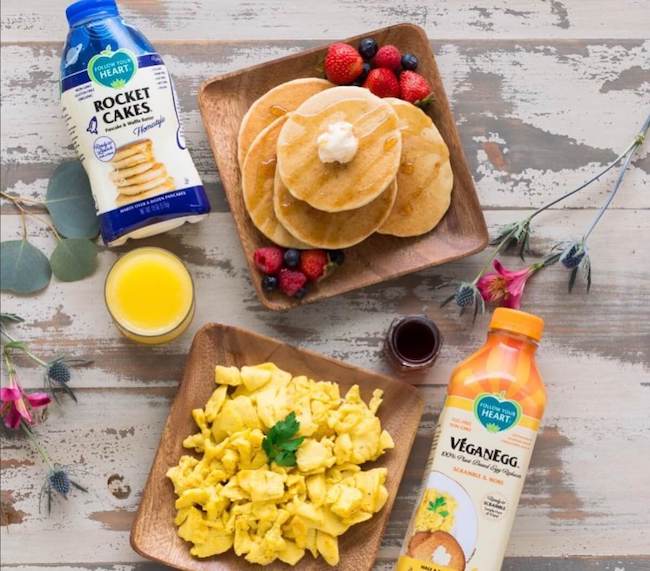 Since the 1970s, Follow Your Heart has created a number of vegan products to replace the animal-based counterparts. The line includes meltable vegan cheeses, dressings, breads, spreads, and the iconic VeganEgg that debuted in 2015. The latter comes in a cardboard egg carton, with instructions to “just add ice water” for the perfect tofu-less scramble or egg replacement in baked goods. The original VeganEgg will still be available, in addition to the pourable version.

Follow Your Heart products are widely accessible and can be found in grocery stores and restaurants around the world. The company even partnered with select Australian Domino’s to premiere the fast-food chain’s first vegan pizza options.

Both the Liquid VeganEgg and Rocket Cakes will be available in stores this June, along with a vegan probiotic yogurt line. A full vegan breakfast has never been easier.