Fort Walton Beach High School in the Florida Panhandle is currently the only public school in the county to offer vegan school lunch options. Despite going plant-based for one student, local news site NFW Daily News reports that the food is a hit with all students.

Cafeteria manager Robin Brown first began offering plant-based options when a vegan student began emailing her daily to inquire about the day’s lunch. The cafeteria manager, who shares a special bond with the students she interacts with daily, decided to ensure that all students looking to eat a meatless meal would find food in her cafeteria.

“This kid is great, I love talking to him, but he doesn’t need to be emailing me every day to know if there’s something that fits his diet,” Brown said. “From here on out, he and anybody else will find something in this cafeteria they can eat.”

The high school’s cafeteria now offers a wide variety of vegan options, including four types of plant-based burgers made with different kinds of beans, chickpea curry, rainbow wraps, salad, pizza, chili, stew, meat-free shepherd’s pie, stuffed peppers, and more. Brown, who developed all of the recipes herself, finds that the plant-based options are incredibly popular among all students, regardless of diet. 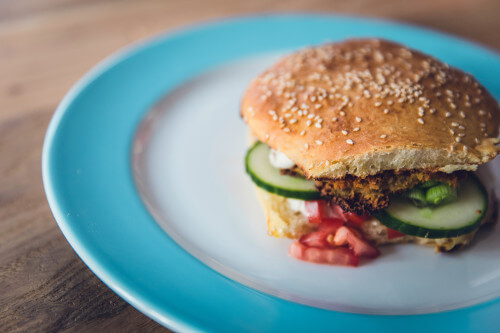 “She’s creative,” said Aneita Sutton, the nutrition supervisor. “She’s got a definite gene in her that likes to create new things and has a taste for combinations. She sees it in her head, and we just help her get there to make it come to life.”

The meals are also a hit with the school’s handful of vegan and vegetarian teachers, who are grateful that it eliminates the need to pack a lunch. Brown is considering adding vegan breakfast as well due to how popular the plant-based food has been.

Although the wide variety of vegan options make Fort Walton Beach High School unique, Brown hopes that she can convince other schools to adopt plant-based menus as well.

“We are working hard to make it the standard for Okaloosa County, and not the exception,” she said. “There have been other schools with an interest, but we have been working with making it compliant to the state standards.”