Eleven-year-old vegan and animal rights activist, Genesis Butler, has become the first-ever winner of the Carlee and Laurie McGrath Young Hero to Animals award. Butler was chosen for the award by PETA Kids for her inspirational attitude toward saving animals.

“Huge congrats to Genesis Butler (@aveganchildsjourney) for becoming the first-ever winner of the Carlee and Laurie McGrath Young Hero to Animals Award!” PETA Kids posted on their Instagram account. “She inspires everyone around her (including all of us here at PETA Kids and PETA!) to use their voices for animals. Genesis: You’re changing the world!”

The young activist responded to the post on her own Instagram account, stating that the award was an honor. “It means a lot because PETA @peta @petakids and @peta2 has supported me since I became an activist 5 years ago!” Butler wrote. 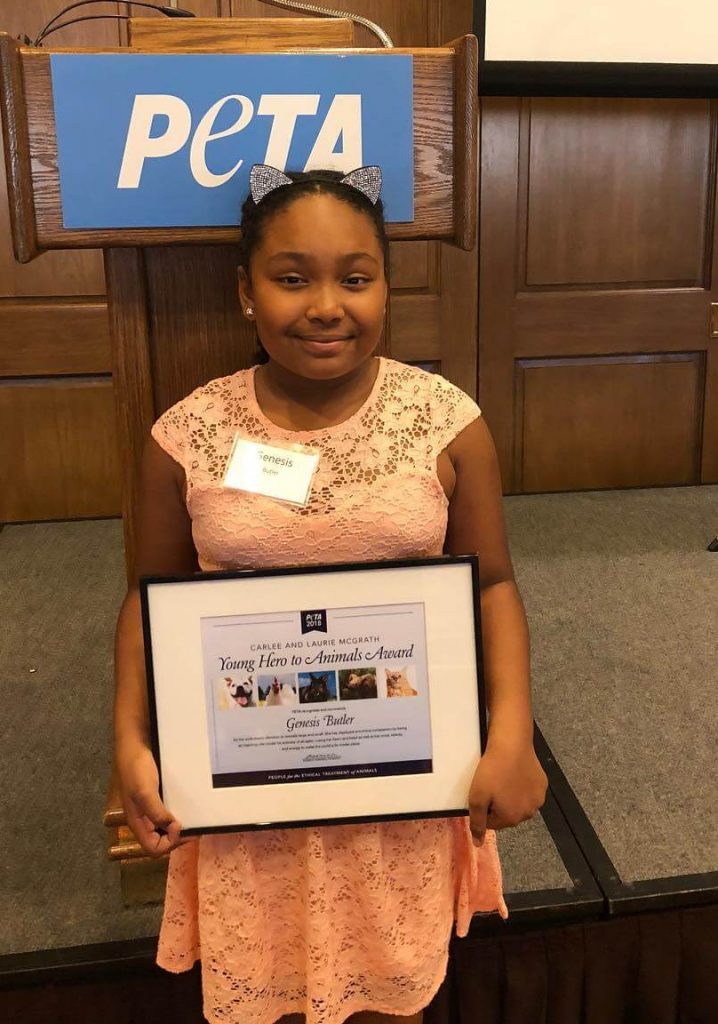 Butler has already achieved a lot in her eleven years, becoming the youngest Ted Talk speaker ever in 2017. In her talk, she explained how she had initially turned vegetarian at the tender age of three. The decision was prompted by her discovery of the truth behind her favorite food, chicken nuggets. After reaching the age of four, her journey as a vegan began, as she began to ask questions about cow’s milk. The process of taking milk from an animal to feed humans just didn’t sit right with Butler. Despite her young age, she knew veganism was for her.

Due to her rousing Ted Talk, Butler was also put on the bill of Moby’s music festival, Circle V, last year. The vegan musician stated the passionate young activist was one of his “favorite people.” All the profits from the festival went to funding the work of animal rights organization, Mercy For Animals.

Butler has a deep love for animals with a deep love of the planet to match. Her veganism is not just rooted in animal welfare, but also environmental issues. “I see a lot of people in their eco-friendly cars, with their “save the earth” bumper stickers, but they’re in drive-thrus ordering burgers,” she stated last year.