Can a new book reframe chickens from the deep-fried bucket-fillers to birds as majestic as eagles, as beautiful as peafowl?

That’s the mission behind the new book “Chicken: The Book” from Italian photographers Moreno Monti and Matteo Tranchellini.

The duo began a portrait project on the most consumed land animal in the world in an effort to show just how beautiful chickens are. The collection features more than 200 portraits of chicken species found all over the world.

“None of these beauties were harmed, forced, or leashed,” the photographers noted in their Kickstarter page, where they’ve already raised nearly €144,000 for the project.

The photographers “brought these chicks to life,” notes the Kickstarter page. “You won’t believe it but all they used was just a simple light set, nothing else was needed: these guys & gals took center stage.”

Tranchellini reportedly first became interested in chickens several years ago when looking for a garden pet. A farmer introduced him to chickens, sparking a love for the birds shared by Monti. The two decided to start taking photos of the birds at various bird shows. 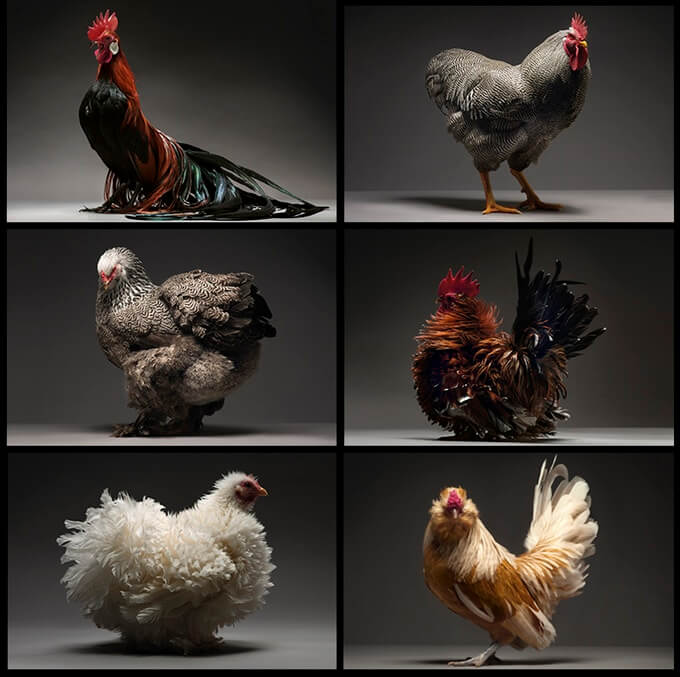 “We felt like chickens had been waiting for their moment in the spotlight,” the duo explain on their Kickstarter campaign.

Despite the tens of billions of chickens currently on the planet, they are largely hidden from the spotlight other animals regularly benefit from. The majority of chickens don’t see photographers swooning over them–they’re mostly living in dark, crowded sheds with tens of thousands of other birds, the industry norm for both broiler and egg-laying hens.

But consumer preferences are shifting — vegan chicken-style meat is available in most major supermarkets. And brands like the Bay Area’s JUST Foods is recreating chicken meat in a lab setting — growing chicken from animal cells rather than the whole animal– and it’s also seeing significant success with its vegan mung bean-based egg that scrambles just like a chicken egg.

Awareness efforts like the book from Monti and Tranchellini may help to destigmatize the animals as just dense forms of protein with feathers. It’s a move a growing number of animal rescue organizations and sanctuaries have seen success with — exposing consumers to the individual personalities and emotions of animals and people are less likely to want to eat them.

That’s what the UK series “Travel With a Goat” discovered after it began airing. A poll of viewers found that one in six Brits who’d seen the show — 16 percent — said they wanted to reduce their meat intake after viewing. “Travel With a Goat” sees people take real-life adventures with animals before they have to slaughter and eat them.

More info on “Chicken: The Book” is available here.