Goldman Sachs have revealed the winners of the India Impact Fund 2018. Three non-governmental organisations were awarded $100,000 as a grant to help them continue with their work. Amongst the winners is Say Trees, an organisation based in Bangalore, which is determined to protect the environment through vital tree-plantation projects.

Writing on their website, the organisation describes themselves as ‘a professionally run group of ordinary people extraordinarily determined to protect the environment not just by themselves, but also by sensitising others towards the importance of environment conservation and goading them on to participate in tree-plantation campaigns.’

During the last monsoon season, Say Trees managed to plant a staggering 95,000 trees. In an interview with Vegan First, Durgesh Agrahari, the head of partnerships and projects with the organisation, said that winning the award from Goldman Sachs will provide their team with vital motivational support and allow them to keep going with their great work. 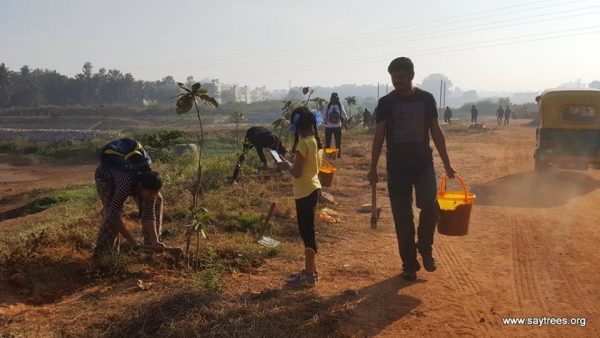 ‘What started as a passion in 2007-08 has grown into a movement with thousands of nature lovers from different walks participating every year in the saplings plantation and maintenance drives,’ Agrahari explained. He then added, ‘this fund will be utilized to create a super dense forest using Miyawaki method of tree plantation. We would be planting over 100 native species with an aim to increase the green cover and local flora and fauna.’

Speaking of his personal life, Durgesh revealed that he is a vegan. He highlighted that it is predominantly the environmental impact of the meat and dairy industry that caused him to make the choice, as well as wanting to live a kinder existence.