The Good Food Institute (GFI), a nonprofit organization that promotes sustainable, vegan and “clean” alternatives to meat, dairy, and eggs, has announced the best universities around the world that hold the potential to help advance plant-based and clean meat.

A total of 24 universities across the globe that hold the power to help disrupt the meat industry and create a more sustainable food system have been identified based on their technical expertise, research capabilities, and private-sector partnerships. The institutions have been divided by those that are ideal for researching vegan meat and those more equipped to help accelerate cellular agriculture technology. 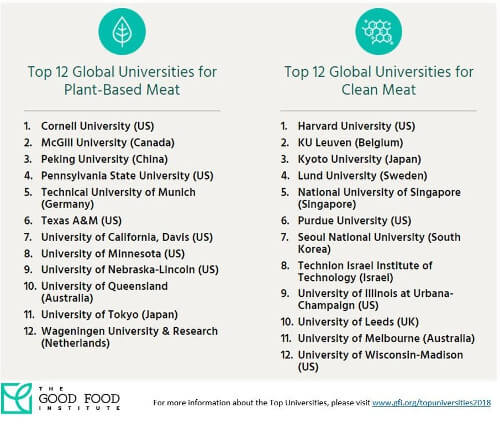 “Universities can have a major impact on this space,” said GFI’s Executive Director, Bruce Friedrich. “USDA-funded research at the University of Missouri was key for the plant-based meat company Beyond Meat. Dr. Mark Post’s research at Maastricht University led to the first clean meat burger in 2013, followed by the formation of the clean meat company Mosa Meats.”

In order to incentivize universities to research vegan and clean meat, GFI has also announced a $3 million grant program in order to support open-source research for plant-based and clean meat.

“Despite the potential to revolutionize the food system and allow researchers to solve some of the world’s biggest problems – from climate change to antibiotic resistance – we estimate that less than 0.3 percent of the world’s universities are currently engaged in plant-based meat or clean meat research,”  said GFI Scientific Foundations Liaison, Dr. Erin Rees Clayton.

On the grant page, Dr. Rees points out the huge potential of the plant-based and clean meat spaces.“Plant-based and clean meat research have huge potential to catalyze the evolution of our food system, solve critical global issues, and lead to rewarding careers for scientists working in this space – and GFI wants to help you pursue this work,” she wrote.

The deadline to submit proposals for GFI’s grant program is November 21. Winners will be announced in January 2019.