Multinational tech company Google has made it easier than ever to find vegan restaurants.

An advertisement highlighting how easy it is to find vegan food via Google’s new “Explore” feature, which launched this summer, was spotted in an NYC subway station by Rachel Atcheson, the deputy strategist to vegan Brooklyn Borough President Eric Adams.

“Spotted in the wild (aka one of the busiest train stations in NYC),” Atcheson wrote. “An ad for Google Explore that implies people are searching the word vegan. Yep, times are a-changin’.” 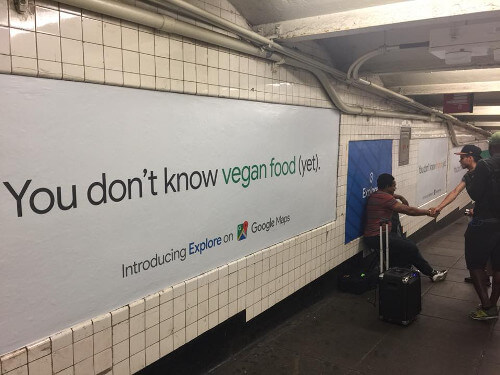 The Verge reports that Google recently updated Google Maps in order to make it easier for users to find new restaurants. The redesigned app features an “Explore” tab that appears on the bottom of the app when you open it up. Categories that might be of interest to the user, including coffee shops, museums, upcoming events, and more.

The update also includes a restaurant rating feature where Google rates restaurants based on how much it predicts the user will like them, gaged by the types of restaurants visited. So, if one frequents vegan restaurants, it is likely that Google Maps will automatically rank other plant-based eateries as being of interest. The new “For You” tab acts as a news feed for new restaurant openings curated from platforms that cover local restaurant scenes, including “Eater” and “Grub Street.”

It’s no wonder why Google would run its ad in one of the busiest NYC subway stations. Earlier this year, international animal rights organization PETA (People for the Ethical Treatment of Animals) ranked NYC as the second-most vegan-friendly city in the U.S., right behind Los Angeles. “The City of Dreams is a vegan dream come true,” wrote the organization.

When it comes to finding plant-based food, both Manhattan and Brooklyn offer a diverse array of vegan and vegan-friendly establishments to suit every craving. The city offers vegan soul food, Mexican, Japanese, Mediterranean, French, fine dining, old-fashioned burger joints and diners, delis, cocktail bars, and beyond. The City That Never Sleeps is also no stranger to dessert, with numerous bakeries that serve treats free from all animal products.