A new study published in the journal Nature Communications suggests that if humans want to improve gut health, they need only look to the diet of our closest animal relatives, chimpanzees and gorillas.

The study aimed to analyze the extent to which the gastrointestinal microbiome, or the living bacteria and microbes present in the gut, impacts health, metabolism, and immunity to disease. Researchers from the Wildlife Conservation Society and Columbia University’s Center for Infection and Immunity began the study with the understanding that microbiota in humans and animals is not static, but fluctuates depending on the individual’s environmental and lifestyle factors.

Over the course of three years, scientists analyzed the microbiome content in the feces of wild western lowland gorillas and sympatric central chimpanzees. Researchers found that the microbiota of chimpanzees, whose diets rely primarily on ripe fruits all year round, showed no significant changes. The gut microbes of western lowland gorillas were found to fluctuate with their seasonal diet. During the dry summer, gorillas ate mostly ripe fruits and fiber-rich foods like leaves, bark, herbs, and fibrous fruits.

The results were then compared to findings from different studies that looked at the gut flora in human Hadza hunter-gatherers from Tanzania and humans living in industrialized areas. The Hadza, whose diets depend on seasonal availability, were found to have consistent microbiomes like chimpanzees. Humans living in cities, on the other hand, were shown to be the only ones lacking in the Prevotella enterotype, a type of gut bacteria associated with plant-based diets high in carbohydrates. 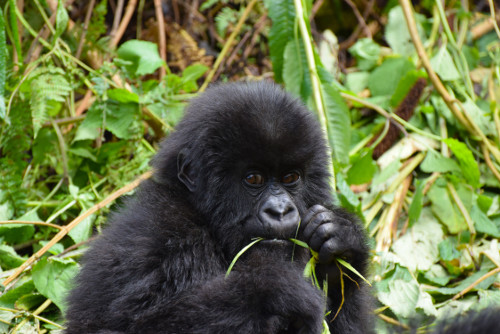 “The fact that our microbiomes are so different from our nearest living evolutionary relatives says something about how much we’ve changed our diets, consuming more protein and animal fat at the expense of fiber,” said study senior author Brent Williams, Ph.D., in a statement. “Many humans may be living in a constant state of fiber deficiency. Such a state may be promoting the growth of bacteria that degrade our protective mucous layer, which may have implications for intestinal inflammation, even colon cancer.”

“While our human genomes share a great deal of similarity with those of our closest living relatives, our second genome (the microbiome) has some important distinctions, including reduced diversity and the absence of bacteria and archaea that appear to be important for fiber fermentation,” added study author Allison Hicks, Ph.D.

Indeed, high meat intake has been linked to the health issues highlighted by Williams. According to Dr. Michael Greger, author of “How Not To Die” and founder of NutritionFacts, inflammation is less a result of the anti-inflammatory power of fiber-rich foods like fruits, vegetables, grains, and legumes, and more a result of eating animal products such as meat, dairy, and eggs, which are inflammatory. A number of studies have also linked red meat with the increased risk of colorectal cancer. In light of the growing body of evidence that highlights diets heavy in animal products as having adverse effects on human health, Harvard Law is urging the USDA to thoroughly examine the link between meat and disease.