International environmental organization Greenpeace is urging the New Zealand government to ban new dairy farms in a bid to protect the environment.

While the group welcomes the government’s commitment to cleaner rivers, it worries that improvements will be limited if new dairy farms are built. A National Policy Statement on Freshwater Management, as well as new environmental standards, was due for implementation by the end of this year, but is delayed until 2020. Greenpeace is now calling for immediate “interim measures such as an immediate ban on dairy conversions and intensification of farms.”

According to New Zealand news source Stuff, Greenpeace freshwater campaigner Gen Toop attributes the problem to the scale of cattle farming. “There are already too many cows for our waterways to cope with. Yet there are new dairy farms being built and existing farms are still adding more cows,” she said.

Greenpeace’s petition has over 47,000 signatures, and the issue has not gone unnoticed by local people. In the Mackenzie Basin catchments, twelve people were recently arrested for protesting the construction of a new farm, which plans to house 15,000 cows on land just south of Lake Pūkaki – home to endangered species like the black stilt. The new development will leach more than 76,000 kg of nitrogen and nearly 2,000 kg of phosphate into the catchment every year. 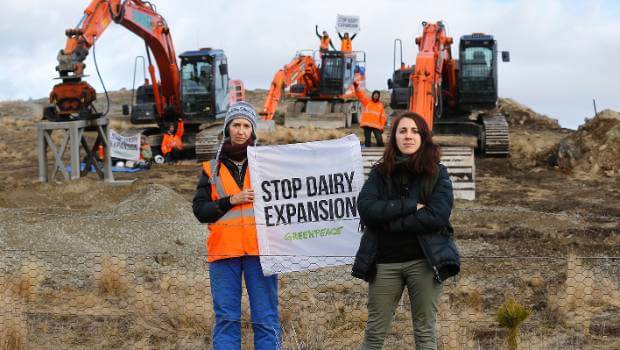 With even major dairy companies admitting that industrialized dairy farming is unsustainable, Greenpeace’s demands are well-supported. Fonterra, a global dairy nutrition company owned by 10,000 farmers, and Landcorp, a government organization dedicated to developing the best farming systems, have opposed the Mackenzie Basin development.

Federated Farmers, a farmers’ lobbying group, also agrees that the development is not ideal. The group’s water and environment spokesperson, Chris Allen, said that farmers are already working to introduce environmental protections.

Further, Dairy NZ chief executive Tim Mackle is advising farmers on what changes to make and how to lower water contaminants, particularly over winter when the soil is most susceptible to damage. “As a sector, we’ve recognized for many years that change is happening,” Mackle said. “We’ve acknowledged the impact dairy farming has had on the land and it will take time to fix some of the historical issues.”