Major fashion label Gucci has pledged to ban the use of angora wool in its designs.

The decision comes in response to a campaign led by animal rights giant People for the Ethical Treatment of Animals (PETA). The organization put together an exposé of what life is like for angora rabbits and pitched this to major brands in the fashion industry hoping to open their eyes and convince them to ditch the material from their lines for good. With Gucci, the efforts paid off.

“Gucci has taken an important step toward eliminating cruelty in its designs by banning angora wool,” said PETA Executive Vice President Tracy Reiman in a statement. “No more fur will be torn out of gentle rabbits for a sweater, and PETA encourages high-end designers to follow Gucci’s lead.”

The decision comes only a few months after the brand decided to ditch fur, despite many of its previous collections using the material in abundance. In an interview with Business of Fashion, CEO of Gucci Marco Bizzari said, “do you think using furs today is still modern? I don’t think it’s still modern and that’s the reason why we decided not to do that. It’s a little bit out-dated.” 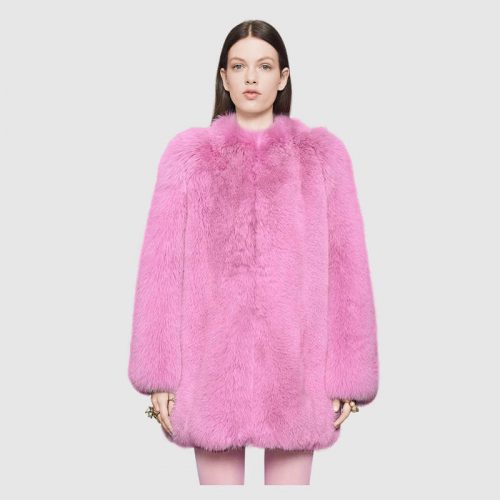 The fashion industry is changing. In May, Topshop, Gap, Banana Republic, Athleta, and Old Navy all made the decision to remove mohair from their production lines. This was also prompted by an exposé put together by PETA. Further, in June, online fashion giant ASOS overhauled its animal welfare policy, removing materials such as feathers, down, mohair, silk, cashmere, and more, from its designs.

“PETA applauds ASOS for leading the charge for compassion in fashion,” said Yvonne Taylor, Director of Corporate Projects for PETA. “In response to PETA’s campaigns, consumers are changing the face of the industry by demanding that designers and retailers ditch animal-derived materials in favor of cruelty-free alternatives that look great without causing suffering.”

Clothes made with animal products are beginning to fall out of favor with consumers. In April, leading magazine Vogue listed vegan fashion as a top trend to invest in. “The vegan movement is taking over more than menu choices this year,” the publication stated.