Shoppers can now find Halo Top’s Dairy-Free Toasted Coconut, Peanut Butter Cup, Chocolate, and Sea Salt Caramel at Tesco supermarkets, as well as Ocado and Whole Foods. Select UK grocers previously carried a few flavors from the popular brand, but this is the first time UK consumers will get to try the non-dairy coconut milk-based options.

According to The Grocer UK, Halo Top’s president and COO said, “It’s incredible to launch our non-dairy line in the UK so soon after launching our dairy line, which is a true testament to the response from our UK fans.” He continued, “It’s exciting to think that we can now reach an entirely new UK consumer, and we can’t wait to expand our non-dairy and vegan range in the future.”

Halo Top set the stage for quality low-calorie ice cream back in 2011. It is famously known for both its extensive range of fun and delicious flavors as well as its incredibly low-calorie range. The brand has come out with every flavor from Birthday Cake to Candy Bar, and yet every pint is only 280 to 360 calories. Stevia is used as the sweetener. 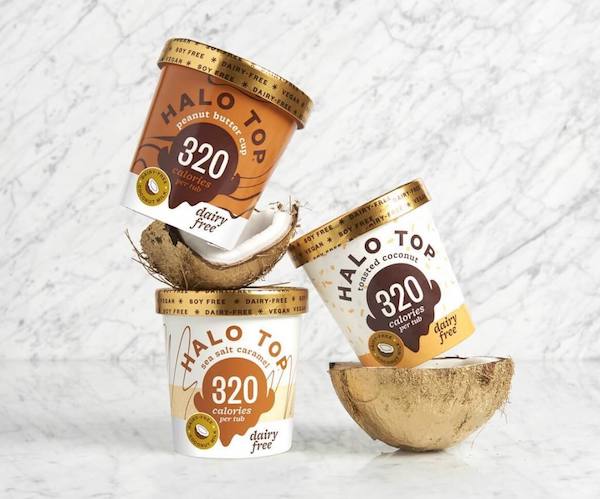 Due to ongoing consumer requests, the company finally launched its first non-dairy line in February 2018. Following the initial success, Halo Top expanded its vegan flavors and now makes 14 sweet dairy-free options, which are available throughout the U.S. and quickly making their way into select Canadian, Australian, and UK locations.

The pint’s popularity eventually led to multiple scoop shops in the U.S. Halo Top currently has two storefronts in Los Angeles, offering an array of non-dairy flavors and toppings in addition to vegan soft-serve, a scoop shop exclusive.

All flavors are currently being shipped to the UK from the American producer, but The Grocer noted that there may be plans to construct a UK production facility given the overwhelming response from UK fans. Further, given the expected consumer reaction, additional non-dairy Halo Top flavors such as Pancakes and Waffles, Vanilla Maple, and Cinnamon Roll may soon be making their way to the UK.