Celebrity art-pop singer and actress Halsey asked her 9.19 million Twitter followers where to find the best vegan donuts in Manhattan, hinting that she may have followed in the footsteps of fellow artists Beyoncé and Drake and adopted a plant-based diet.

Halsey posted the tweet that simple stated: “[b]est vegan donuts in Manhattan GO!”. The Twitterverse was quick to respond and share their favorite options. LIVEKINDLY replied by sharing a vegan eatery in mid-Manhattan that does more than just serve plant-based food (and donuts). P.S Kitchen donates all proceeds to sustainable charities.

However, Manhattan is a large place and there are a number of eateries that serve up vegan donuts (Halsey, you’re in luck!). Dun-well Donuts lives up to its namesake, as all donuts made by the Manhattan eatery are free of animal products yet the flavor consumers desire is uncompromised.

Vegan Divas’ “Always Delicious” donuts can be delivered. Doughnut Plant’s fresh handcrafted options can also be sent to specified locations across NYC; the shop isn’t fully vegan but they have sweet vegan options! Additionally, Peter Pan Donuts & Pastry Shop can make your vegan donut dreams a reality, and there are also many options to check out at The Cinnamon Snail! Go gluten-free as well as vegan at Erin McKenna’s bakery where donuts are on offer alongside a range of sweet treats. 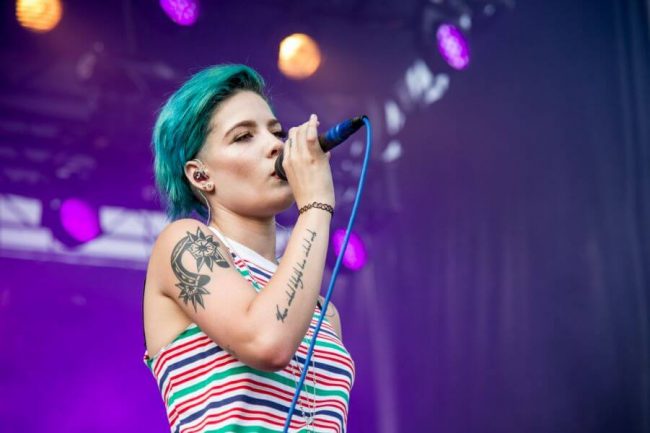 This is not the first tweet Halsey has shared that made vegan followers open their eyes a little wider. Back in 2016, the popular singer shared a cryptic tweet that reads “‘You’re a vegan right?’ ‘No, I’m a libra’.” Twitter users then debated whether this was Halsey’s way of shedding some humor online or acknowledging vegan rumors.

Not one to keep quiet about issues close to her heart, Halsey, who is believed to be currently dating rapper G-Easy made a huge splash when she spoke openly and honestly to a women’s march crowd. She shared an emotional moment with New York City marchers while reading her original free verse poem “A Story Like Mine”, about her experiences with sexual abuse. CNN said the poem “closed with strong words of hope and encouragement that triggered an outpouring of support and gratitude from around the world.”

Back in 2015, Halsey spoke to PureVolume about her music and how it relates to feminism. “The fact that I’m a female artist and am 20 years old, I need to write music that is honest but not vulgar and doesn’t victimize. That alone makes me a bit of a feminist artist.”

Feminism and veganism are now considered to be interlinked more than ever, maybe Halsey’s cryptic tweets could hold an underlying message about her lifestyle. Or, maybe Halsey just knows how flavorsome vegan food is and cares to indulge in some animal-free donuts every now and again.