Accio! Box, a Harry Potter themed subscription box, just announced its new commitment to providing 100 percent vegan and cruelty-free products in all of its future shipments. The move was praised by plant-based wizards and witches everywhere, including one prominent Ravenclaw, actress and activist Evanna Lynch.

The magical monthly subscription company has always striven to adhere to high sustainability standards, and this latest move confirms its eco-conscious commitment. All Accio! boxes are delivered in packages made from recycled material, and the company has never included apparel made from animal textiles. However, even though the founder is vegan, a few boxes have included some products that contained dairy and egg ingredients.

This changed when Tylor Starr, Lynch’s friend and guest co-host of The Chickpeeps Podcast, reached out to the company on behalf of The Protego Foundation. This group of loyal Potter fans works with various Harry Potter themed companies to help them maintain and promote cruelty-free business practices. Shortly after its conversation with Starr, the Accio! Box made the switch and went completely cruelty-free, right down to the chocolate frogs and Bertie Botts beans. Starr gave the company a shoutout on the “Activism vs. Attractivism with Earthling Ed” episode of the podcast, and Lynch enthusiastically praised Accio’s actions. “That is so awesome! That’s huge!” she exclaimed. 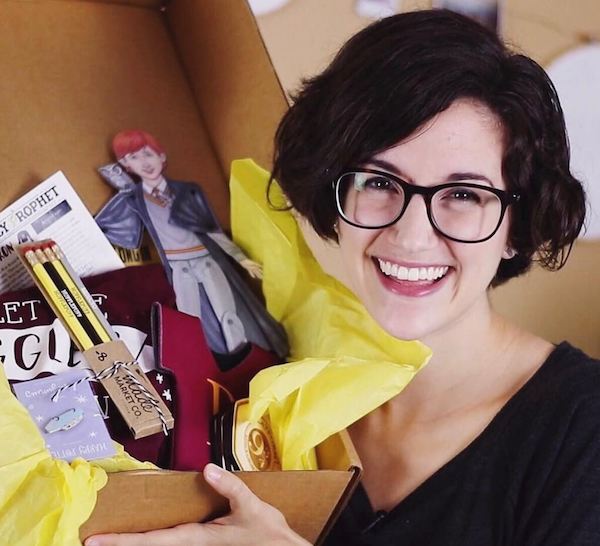 What can one find in an Accio! Box? They may not contain the Sorcerer’s Stone, but each box is filled with a medley of magical items. Expect fun t-shirts, stickers, candles, butterbeer flavored tea, and more. The company focuses on providing items that aren’t readily available in stores, making each unique and surprising. Don’t worry, though, the boxes are all Horcrux-free.

For those still waiting on their Hogwarts acceptance letter and refuse to accept their muggle status, the Accio! Box will brighten your day, at least on a monthly basis. Its contents can be used to sharpen one’s skills in preparation for the wizarding world – we won’t tell the Ministry you used magic outside of school.

Learn more about the intersections of veganism and the wizarding world through Lynch’s weekly podcast, The Chickpeeps.