The Forward Food program was created in the Harvard kitchens in 2015, but founders Chef Wanda White and Ken Botts returned to campus this June to follow up. The universities’ chefs and managers enrolled in a two-day hands-on intensive training session to expand upon their culinary skills and learn more about the nutrition and variety of plant-based fare.

David Davidson, Managing Director of HUDS, said in a press release, “This training gives our chefs a chance to reframe their thinking. Many of them were classically trained in a style where meat was the center of the plate and the core, defining flavor. Forward Food gives them an opportunity to explore new recipes, techniques, and ingredients.”

Martin Breslin, the Director of Culinary Operations at Harvard, also stated, “We’ve been doing a great deal of work making plants a more prominent feature on our menu. This past year, we added a dedicated plant protein dish at every lunch and dinner…We’ve altered the ratio of meat to vegetables in countless dishes, and created stations where students can really tailor a dish’s contents to make meat a condiment, rather than a feature.”

Forward Food may have helped to springboard this plant-based initiative when it began its chef trainings at Harvard nearly three-and-a-half years ago. Since formalizing the program in the Harvard kitchens, the organization has held over 160 culinary workshops and trained more than 2,400 food service professionals. 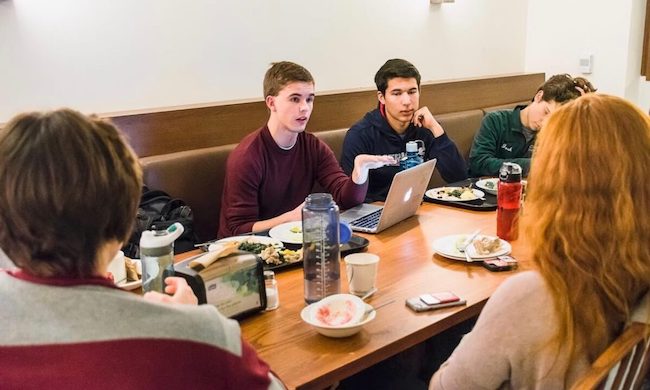 Of course, everyone needs a bit of a refresher course, and in this three-year gap, HUDS has employed new chefs who may not be so familiar with plant-based cooking. Davidson noted, “It’s awesome to watch our team embrace new ways of thinking. They’re tasting these new recipes and they’re excited by the possibilities. They’re energized by the work.”

Although the number of vegan and vegetarian students has remained relatively stable since the program first launched, the school is seeing a dramatic change in what students are eating, or rather, not eating. Officials have noticed a decline in meat preferences, as students are choosing more plants to make up the core of their meals. Based on a recent satisfaction survey, 57% of respondents affirmed that it was “very important” to them to eat healthfully, which entails eating less meat and more vegetables, whole grains, and “lean protein.”

HUDS serves approximately 25,000 meals every day. Botts stated, “[Harvard is] shaping the way [students will] view and consume food moving forward. What happens in a campus dining hall can alter an individual’s approach to food for the rest of their lives.”