The word ‘humane’ is described by Merriam Webster Dictionary as “marked by compassion, sympathy, or consideration for humans or animals

As such, the term ‘humane meat’ becomes an oxymoron which then raises the moral question – can there be ‘humane’ slaughter?

As standard practice, “humane-certified” farms regularly perform painful procedures on animals without use of anesthetic, families are separated, living conditions are often poor and eventually all are still sent to slaughter. 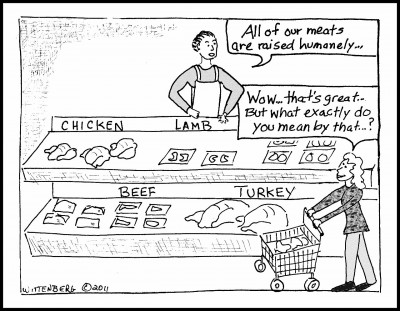 Halal meat production use slaughter methods such as slitting the throat of a live, un-sedated animal whilst a Muslim recites a religious phrase – this is deemed by Islamic religion as the most humane way to take a life for food. Alternately, mainstream slaughterhouses stun animals before slaughter with the aim to render animals unaware of the pain (although this isn’t always the case) and pigs are often gassed alive in confined spaces.

Animal rights activist, Andrea Klader once said, “to examine whether something is ‘humane’, first determine whether you would want it done to you.”

Farmed animals are just as empathetic, sensitive and intelligent (if not more) than our beloved pets. However, the agricultural industry is allowed to abuse animals under ‘standard farming practices’; abuse which is covered and enabled by the law. If a domestic animal such as a cat or dog were in place of a dairy cow, breeding sow or down-goose and received the same treatment, those actions upon the victim would warrant felony animal cruelty charges – charges which agriculture is exempt to.

From psychologist, Dr Melanie Joy, “It is because of carnism that we can pat our dogs while eating pigs and wearing cows. From birth, this belief system is taught through both culture and those around us.”

It could be argued that the term ‘humane meat’ is just another label stuck on animal products to give consumers peace of mind that what they are buying is okay, and came from a happy farm. Regardless of the labels such as – ‘free-range‘, ‘grass-fed’, ‘humanely raised’, all animal products still support unnecessary exploitation of animals.

Meat comes in many different forms but if it is to accurately represent the term ‘humane’, it would have to be an ethically-produced, plant-based alternative that mimics the taste, texture and flavor of traditional meat – a feat which is already possible and becoming more accessible by the day.