(Updated October 30, 2019). Ready to go vegan but worried it won’t work with your budget? Or maybe you already eat vegan regularly but are in search of budget-friendly recipes and shopping tips. Look no further! This complete guide on how to go vegan on a budget will cover all the bases.

How to Go Vegan

Vegans avoid the consumption of any and all animal products and often also eschew animal-derived clothing. Going vegan can seem like a big change at first, but many people suggest starting small and making simple substitutions.

You don’t have to cut everything out at once; instead, try swapping different foods out one by one. Dairy milk for plant-based, meat for legumes, nuts, and tofu, and so on.

It’s important to make positive changes in a way that is healthy and suits your lifestyle, and fortunately, going vegan can be both affordable and straightforward.

Who Is Choosing Veganism?

“Looking back on 2018 as a whole, one of the most notable consumer trends is the shift to a more plant-based diet,” Fraser McKevitt, head of retail and consumer insight at Kantar Worldpanel, said in a statement.

Flexitarianism is increasingly popular as people become more concerned over the health, environmental, and welfare concerns associated with animal consumption. Fifty-seven percent of British people want to ditch meat for environmental reasons, and 80 percent of Americans say they want to swap meat for vegan alternatives.

“Today, 1% of all households include a vegan, 5% have a vegetarian and 10% have flexitarians in their ranks. This move has contributed to consumers eating a total of 4.4 billion meat-free dinners in 2018, an increase of 150 million meals on the year before,” McKevitt added.

Why Are Consumers Choosing Veganism?

Eating more plants, in general, can drastically reduce health risks including heart disease, cancer, and premature death. According to an Imperial College London review of several studies on fruit and vegetable consumption, consuming 200g — approximately 3 portions – of fruit and veg daily could reduce the risk of cardiovascular disease by 13 percent. It could also reduce the likelihood of cancer by 4 percent and premature death by 15 percent.

Research carried out by Health Research International has revealed that 47 percent of all consumers of plant-based products do so for the animals. According to the animal rights organization PETA (People for the Ethical Treatment of Animals), each vegan person saves up to 100 sentient animal lives every year.

As the demand for vegan food grows, even the price of luxury plant-based items will drop with time. Vegan meat, in particular, is the most popular plant-based product currently available. This is according to research carried out by The Good Food Institute (GFI) and the Plant-Based Foods Association (PBFA).

Supply and demand dictate the price of such products. When vegan producers have a larger share of the overall meat market both the cost of production — and the price of purchase — will drop. Liz Specht Ph.D., a senior scientist at the Good Food Institute (GFI), believes that a price parity between vegan meat and animal products could be coming soon.

“Industrial animal agriculture has been operating and optimizing at a global scale for decades,” Specht explained in a post on GFI’s website. “Yet it is still inherently more efficient to make meat directly from plants rather than feeding our crops to animals and then eating a part of the animal.”

She added, “It’s all but inevitable that the plant-based meat industry will eventually be cost-competitive with conventional meat.”

Why Does Veganism Need to be Affordable?

Ensuring modern plant-based food is accessible is absolutely essential. In the U.S., it is overwhelmingly low-income Americans and people of color who are most concerned about climate change, and it is crucial to ensure veganism is not only represented through the consumption of modern luxury items. It is also important to remember that the roots of veganism are in poor communities from all over the world and is not a modern, Western invention.

Organizations such as Chillis On Wheels, a vegan charity, are dedicated to improving accessibility by distributing free plant-based meals to vulnerable people. Chillis On Wheels works across the U.S. promoting compassion and respect and is focused on making veganism available to all.

The Chilis on Wheels website says that: “An empowered community is key in dismantling systematic inequalities that prevent veganism from being attainable by poor and low-income communities. Through our networks of support, we’re collectively building alternate systems to make veganism accessible to the areas that we serve.”

How to Go Vegan on a Budget

While going vegan is sometimes perceived as an expensive choice, many people find that their weekly shop becomes cheaper after adopting a plant-based diet. Here are some key areas to work on in order to stay healthy and save money.

Cook and eat at home. Cooking from scratch is an easy and ultra-effective cost-saver, and avoiding pre-packaged ingredients is also good for the environment.

Some of the new vegan alternatives in particular — meat, cheese, desserts and so on — can seem a little expensive. But did you know that many people actually reduce their grocery bills after going vegan?

Healthy vegan staples such as legumes, grains, and seasonal fruits and vegetables are some of the most budget-friendly foods out there. And they are also the healthiest options for you, the planet, and your bank balance.

Nuts and seeds can also be very affordable if bought in bulk. Products like oats and rice are filling and keep extremely well. Comparing different stores and planning your shop ahead of time can really keep the cost down, as can batch cooking meals for the week.

Legumes and grains are perfect for bulk cooking and curries, stews, pasta sauces, and soups all keep well in the fridge and freezer.

Buying in-season produce is an easy way of maximizing the nutritional benefit of your food while minimizing the cost. Seasonal fruit and veg tend to be fresh and therefore contain a higher density of vitamins and minerals.

Seasonal fruit and veg also tends to be locally produced, so choosing to eat seasonally supports local and sustainable farmers. This can also minimize the environmental impact of your food shop. 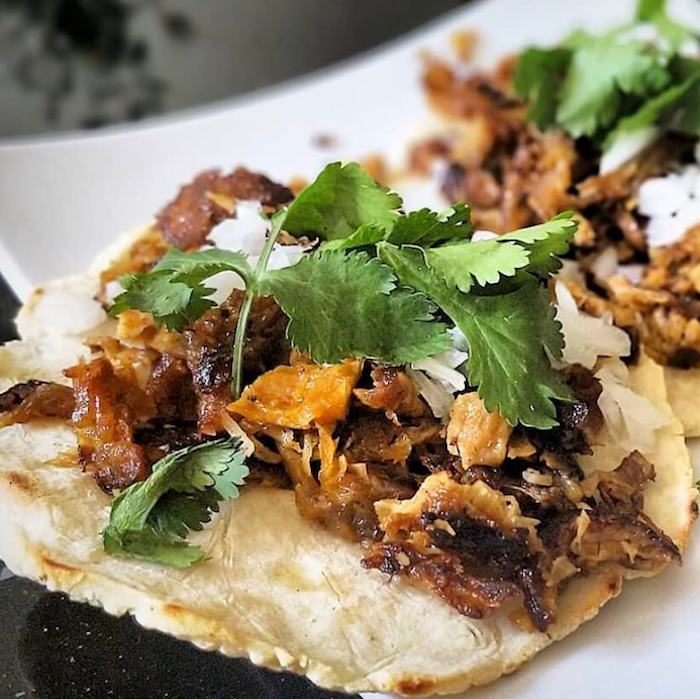 Making vegan substitutions is extremely straightforward, so it’s easy to adapt all your favorite meat-based dishes with plant-based ingredients.

Legumes and pulses are a great replacement for minced beef or lamb and shepherds pie, bolognese, and chili are just as good when filled with beans and lentils.

If you want something a bit more meat-like, soya mince is also an affordable and nutritious staple. Many supermarkets sell high protein, own-brand versions. TVP, or textured vegetable protein, is a practical plant-based staple available from many health and whole foods stores.

One pot, vegetable-packed dishes are a perfect starting point and are full of protein, vitamins, and minerals. In a coconut curry containing brown rice, lentils, and kale — recipe available here — you can enjoy a protein-rich and nutrient-dense meal.

Kale, in particular, contains protein, B vitamins, magnesium, and iron; helping you fight fatigue, boost your immune system, and even lower your cholesterol. Rice and lentils together is also a complete protein, meaning that it contains all nine essential amino acids.

Curries, stir-fries, soups, and stews are an affordable and vegetable-rich source of plant-based nutrition. Adding legumes or tofu is an easy way to increase the protein content, though many vegetables like broccoli and collard greens are also high in protein.

Thanks to the ongoing boom in vegan products, tracking down plant-based alternatives is easier than ever. In the UK, supermarkets such as Tesco and Asda are drastically increasing their production of vegan products, and specifically own-brand and affordable items.

Tesco has just launched its huge “Plant Chef” range, which will be available in over 450 stores. The range is specifically tailored to assist consumers in finding affordable, plant-based alternatives to their favorite dishes.

In the US, Kroger has launched its own range of vegan meats, and Walmart stocks everything from ready meals to vegan staples like grains and gluten-free pasta.

Nielsen data shows that the sales of own-brand products grew three times faster than national brands between 2016 and 2017. Many customers choose store brands specifically for their affordability.

If you do feel like treating yourself to a meal out or you need to pick something up in a hurry, there’s plenty of affordable vegan-friendly restaurants and fast-food out there.

Many Indian dishes are naturally vegetarian or vegan, but be sure to ask if they are cooked in ghee – a clarified butter. It is also easy to find Indian meals containing healthy, nutritious staples like legumes and vegetables.

For fast-food and affordable vegan junk, many mainstream chains have adopted meat-free options. Burger King, McDonald’s, and KFC have all tried out vegan versions of existing menu items. Beyond Meat and Impossible Foods specialize in guilt-free, plant-based meats that taste just like animal products, and are used by many fast-food restaurants.

Taco Bell has just launched a separate vegetarian menu, and many meals there are bean-based and vegan adaptable. In the UK, Wetherspoons have plenty of affordable vegan options including fry ups, curries, and burgers. Wetherspoons also offers items such as a high-protein Quinoa Salad.

If you decide to stay home and cook, try one of these tasty, simple, budget-friendly vegan recipes.

1. Pasta With Chickpea Cream and Vegetables

Quick and cheap, yet still tasty and nutritious, this pasta recipe requires just a few simple ingredients. Add or take away vegetables as you please.

This recipe costs just $1.27 per serving and just over $5 overall, according to Budget Bytes. For an extra creamy sauce, add coconut milk. Serve over mashed potatoes or with bread for dipping.

At just $0.66 dollars per serving, this tomato soup is an affordable lunchtime option. It’s creamy, warm, thick, and comforting, too.

4. Enchiladas With Pumpkin and Black Beans

These tasty enchiladas are simple to put together. Mix together your veggies, beans, and seasoning before loading up your tortillas. Vegan cheese can be a bit pricey, so replace with whichever ingredient you see fit. This recipe tops them with avocado, but you could opt for just simple tomato passata.

Simple, yet delicious. All you need to make this tasty tofu sandwich is tofu (naturally), greens, and some pantry staples to make the sauce.

You don’t need to order Chinese takeaway food when you know how to make your own tasty veggie-packed fried rice. All you need is one pot, rice, some veggies, and 30 minutes spare.

Hearty, comforting, filling, affordable, and nutritious. This lentil-packed vegan shepherd’s pie recipe has it all.

Swap eggs for tofu and make yourself this tasty scramble for breakfast. Serve simply with potatoes and tomatoes.

Instead of lasagna noodles, this moreish Mexican lasagna uses soft tortillas. Add refried beans, veggies, and top with whatever you like. This recipe calls for cilantro and avocado.