There’s a new vegan ice cream pop-up at Bondi Beach, a popular tourist destination just east of Sydney, that is serving up a unique kind of vegan ice cream. Chacha’s Ice Cream is treating its customers to nut-based vegan gelato and soft serve through the end of June.

The pop-up’s owner, Vidya Raman, initiated this limited-time shop to create a healthier version of ice cream that doesn’t taste like coconut. “I find with vegan ice-cream there’s an annoying aftertaste of coconut in every single flavor,” she told Broadsheet, an Australian media publication. Raman uses various nuts, such as cashews, pistachios, and peanuts, for the base of her ice cream to avoid that coconutty aftertaste. She creates this nut base every day by soaking the raw nuts then running them through a stone grinder to create a nut butter-like paste. These bases are then flavored with various whole food ingredients. She never uses refined sugar or gluten in any of her flavors. “It’s as healthy an ice-cream as you’re going to find,” Raman said. 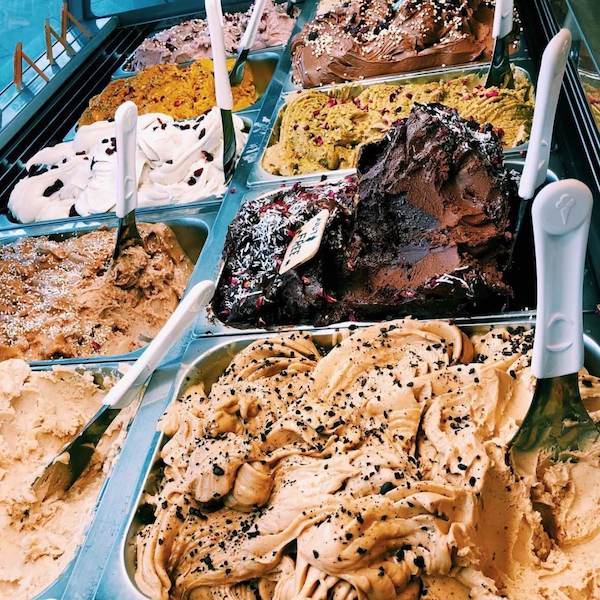 Although not made with traditional ingredients, Chacha’s ice cream still satisfies. The shop counter displays decadent trays of gelato-like ice cream, featuring voluptuous swirls of creamy goodness topped with artful drizzles and edible accents. Some of the shop’s creative flavors include Pistachio Rose, Coconut Chip and Cranberry, Popcorn, Miso-Caramel, and Turmeric. More familiar flavors such as Hazelnut and Peanut Butter are offered for those less adventurous. The shop also sells soft serve for swirling atop vegan cones or creating one of the shop’s signature acai bowls.

Raman believes her ice cream can be nourishing as well as indulgent. Within her shop, she has posted notes that correspond to the various flavors. She informs customers that dark chocolate can help to lower blood pressure, pistachios support heart health, turmeric is anti-inflammatory, and most importantly, ice cream promotes good mental health.

For those who do not live near Sydney, or do not plan to travel before the end of June, nut-based vegan ice cream is widely available in many countries and stores. In the US, So Delicious offers ten different flavors of cashew milk vegan ice cream, which are distributed in major grocery stores nationwide (the company also offers three of its best-selling flavors in Canada). Ben & Jerry’s vegan flavors are also coconut-free, as they are all made with almond milk to let each decadent flavor shine through.