Illinois has just become the ninth U.S. state to ban the sale of ivory and rhinoceros horns. The move comes in an effort to help stop illegal poaching and wildlife trafficking networks in Africa killing elephants and rhinos for their tusks and horns.

The bill was signed into law by Gov. Bruce Rauner on Tuesday and makes it illegal to buy, sell, or trade ivory and rhino horns within the state. While federal regulations were instituted in 2016 banning commercial trade of ivory, including a ban on state-to-state trading, the law doesn’t restrict commerce within the state.

Poachers across Africa and Asia have largely contributed to pushing the animals to the brink of extinction because of the demand for their horns and tusks. The Humane Society of the United States estimates that elephant populations have dropped by nearly 150,000 since 2007 primarily as a result of poaching. More than 350,000 remain in the wild. The rhinoceros is not so lucky; their global population is down to just 29,000, with the white rhinoceros population in the wild expected to be just three adults. 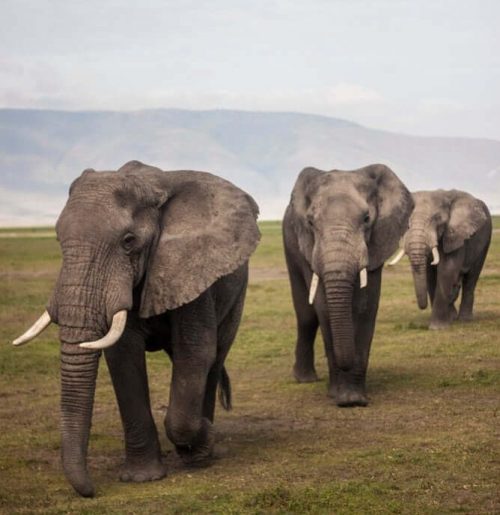 Despite the declining animal populations, poaching remains big business, exceeding profits of $20 billion annually, making it one of the top five criminal industries on par with the drug trade, human trafficking, illegal sale of weapons, and counterfeiting.

“The poaching of elephants and rhinos is particularly gruesome,” reports Chicago Tonight. “Animals are shot with military-grade weapons, and tusks and horns are harvested by cutting the faces off the animals, sometimes while they’re still living.”

The U.S. is one of the biggest markets for illegal ivory. The U.S. Fish and Wildlife Service estimates that between 2010 and 2015, more than 1,000 shipments of ivory — more than 12,000 items — came through Chicago’s ports. “Although many of the items were refused entry, about 2,500 were allowed to pass through the ports,” Chicago Tonight reported.

“Illinois residents should rest assured knowing that their state has said ‘no’ to the ivory and rhino horn trade,” said Marc Ayers, Illinois director for the Humane Society of the United States, in a statement.