Vegan fast-food, diners, and drive-thrus have become increasingly common. It was only a matter of time until an ambitious plant-based entrepreneur took on the California cult classic, In-N-Out. Monty’s Good Burger has done just that, officially opening its doors to its first brick-and-mortar location in Koreatown of Los Angeles this past week.

Although Monty’s is devoid of a drive-thru, it’s food and atmosphere immediately recall visions of the In-N-Out culture. It’s simple menu is displayed above the sizzling commercial grills and fryers, promoting vegan Impossible Burgers, french fries, tater tots, and four flavors of dairy-free milkshakes. The plant-based yet beefy burgers come topped with Follow Your Heart cheese, house spread (akin to secret sauce), grilled onions, lettuce, tomato, and pickles, all sandwiched between a fluffy Bosch Bakery Potato Bun. Just like In-N-Out, customers have the option to order a double or single patty. As an ode to its vegan roots, the company also offers a kale caesar salad.

The grand opening day last Saturday drew a steady stream of customers, all lined up out the door and down the block. Upon reaching the storefront, all were greeted by Monty the mascot, a small three-year-old fluffy white dog, and that distinct aroma so iconic of traditional fast-food joints. The crowd was comprised of everyday people as well as several vegan influencers and leaders, all vying for that classic In-N-Out experience, without the cruelty. 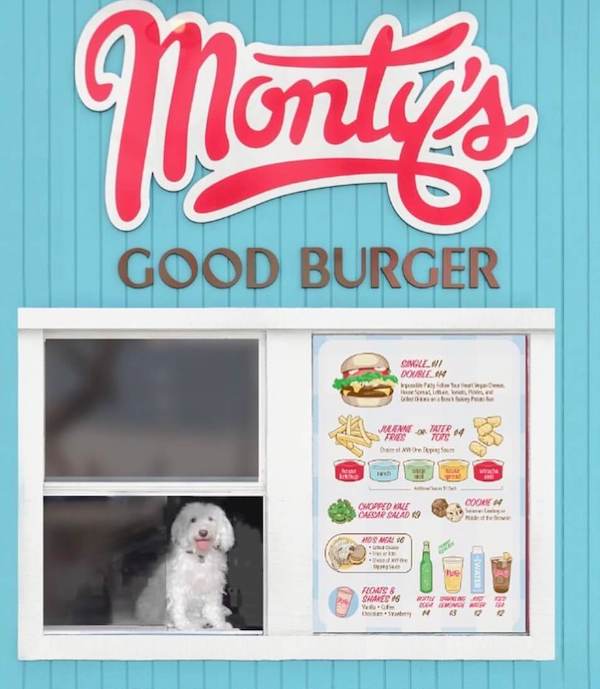 Monty’s Good Burger gained a significant following prior to its official opening. It was originally slated to open at the Riverside Food Lab in April, though delays with that venue have halted progress. The company erected pop-up restaurants at Eat Drink Vegan, Stagecoach, Arroyo Seco, and Coachella, feeding hungry festival-goers and creating instant fans – many whom are not vegan.

Nic Adler, one of the restaurant’s owners, told LIVEKINDLY that the Yelp reviews were so positive, the website refused to post some of the five-star ratings, claiming an unfair bias. Of course, Adler confirmed that these positive reviews were all organic and in no way promoted by the company. A culinary and event professional (he’s the culinary director for Coachella), he and his team just know how to create good food and a fun experience.