New, innovative forms of vegan protein emerged as a growing trend among vendors at the 2018 National Restaurant Association Show, which took place earlier this year in Chicago. In a summary of the event, the organization highlighted the growing trend of plant-based protein among Restaurant Show vendors, posing the question “where’s the beef?”

California-based vegan meat company Beyond Meat’s plant-based Beyond Sausage stood out among the new products, garnering attention from FABI Award judges for its realistic flavor and texture. The company served samples of the vegan Beyond Burger, the Beyond Sausage, and the upcoming Beyond Breakfast Sausage. Since debuting the Beyond Burger in 2016, the company has dedicated attention to appealing to carnivores and adding its realistic vegan meat products to the menus of meat-heavy restaurants on a national and international level.

“The restaurant industry is starving for new products to offer vegetarians, but the irony is that most of our product is being consumed by carnivores who are trying to eat healthier. That’s our biggest target market.” said a Beyond Meat representative. 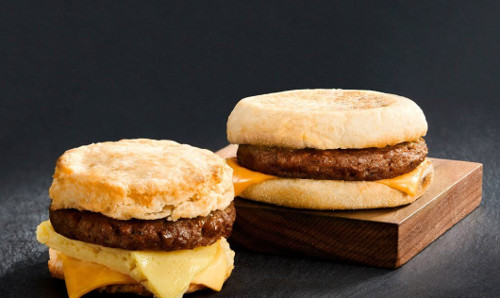 JUST, formerly known as Hampton Creek, was also present at the show, cooking up samples of its upcoming vegan scrambled eggs, Just Scramble. Using a blend of mung beans, oil, water, and spices, JUST aims to show restaurateurs how guests with egg allergies or specialized diets can still dine on familiar foods like scrambled eggs.

The brand has high hopes for the potential of its egg-free scramble, going so far as to hire an egg industry veteran in order to promote the new product to others in the egg industry. But like many other plant-based companies, JUST prioritizes taste above all. “We work with Michelin-starred chefs to do all our product development. If it doesn’t taste good, then none of the other stuff matters,” said Jenna Cameron, partnerships manager at JUST.

Vegan burgers from emerging brands like Carla Lee’s NutBurgers and California-based plant-based food startup Before the Butcher both earned a shoutout, as did the vegan Impossible Burger, which took home the FABI Award, an award that the National Restaurant Show gives to products that it believes will shape the future of food and beverages in the restaurant industry.

Like vegan cheese innovator and founder of Miyoko’s Kitchen, Miyoko Schinner, Stephen Moore of Before the Butcher readily welcomed the competition: “We’re really happy to see all the plant-based companies here because it advances the industry.”