Action star Jackie Chan posted a picture of himself to social media with his two blond golden retrievers to commemorate the Chinese New Year and the Year of the Dog, earlier this week. However, the caption was not the expected ‘Happy New Year’ post. Chan wrote a thorough post asking his sixty-two million followers to adopt their next companion animal from a shelter.

Chan has been a proud dog-lover for years. His social media is sprinkled with photos of his two golden retrievers, JJ and Jones; and he has been known to work with several animal rights organizations on various campaigns promoting animal welfare. Most recently, Chan partnered with the World Society For The Protection of Animals (WSPA) and the Asia Chapter of People for the Ethical Treatment of Animals (PETA). Chan recognizes his celebrity status influence, and he wields it to support animal welfare.

“In support of PETA…I’d like to make an appeal to all pet lovers around the world, try adopting a pet instead of buying commercially bred animals,” Chan wrote on his Facebook post: “I hope everyone can be more compassionate towards stray dogs, stray cats, and other stray animals.” 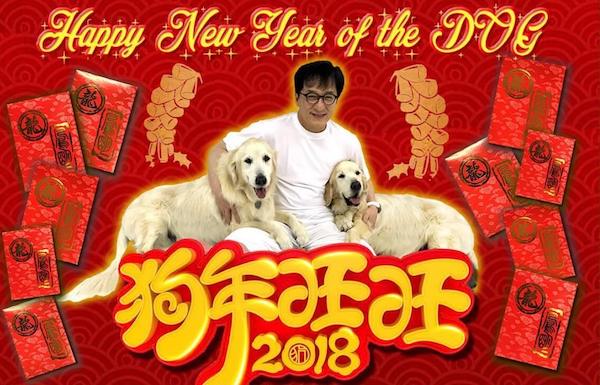 Chan joins the ranks of other compassionate celebrities who use their platform to promote animal rights. Olivia Munn, Leonardo DiCaprio, Pamela Anderson, Ellen Degeneres, Alec Baldwin, and dozens of others have invested their time and capital to fight for animal welfare causes and rally public support.

According to the American Society for the Prevention of Cruelty to Animals, approximately 6.5 million animals enter U.S. animal shelters every year, and 1.5 million are euthanized. Although the numbers are decreasing (2.6 million were euthanized in 2011), the nation still has a significant pet overpopulation problem, and those animals need caring and permanent homes. Pet owners are also encouraged to spay or neuter their pets to prevent overpopulation.

And, as Chan says, people interested in adding a companion animal to their lives can help reduce the number of homeless and euthanized pets by adopting from their local shelter or breed-specific rescue groups.