Celebrity chef, Jamie Oliver, has launched a new, five-day vegetarian challenge in honor of National Vegetarian Week. “Jamie’s 5-day Veggie Challenge,” is set to begin on May 14th, but those looking to get involved can sign up from now.

During the five days, participants will be sent an email each morning with meat-free recipe ideas for the day ahead – inspirational videos will also be sent via email, and extra tips from Oliver will be included too, sent via SMS. Each meal plan will include five portions of fruit and veg, at least, and aims to serve two people – however, this can be scaled up or down depending on the number of people catered for.

“With this challenge, I want to inspire everyone – veggies and meat-lovers alike – to embrace the wonderful world of veg, every day! Knowing how to make veg and fruit the stars of the show is such an exciting way to cook,” Oliver said via a post on his website. “Launching the challenge is also about connecting people in kitchens across the country on a veggie journey, sharing tips, reacting and discovering new things together – I can’t wait!” 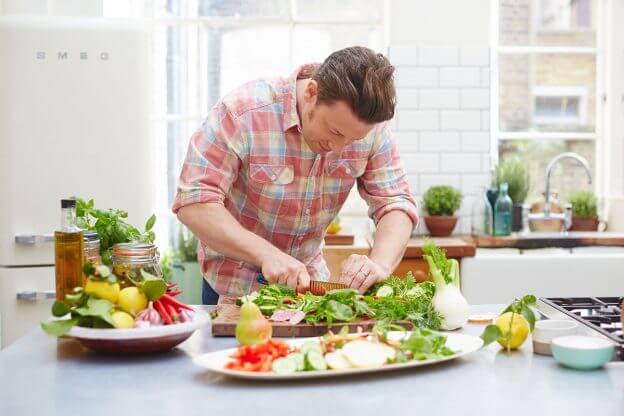 Earlier this month, Oliver teamed up with Hugh Fearnley-Whittingstall, to back Veg Power – a new initiative that aims to increase the UK’s vegetable consumption through effective marketing. Peas Please, an organisation formed of WWF, The Food Foundation, Nourish Scotland, and Food Cardiff, are leading Veg Power. The project intends to “bring together farmers, retailers, fast food, and restaurant chains, caterers, processors, and government departments with a common goal of making it easier for everyone to eat veg.”

In January, the celebrity chef promoted vegan and meat-free recipes on his Twitter account, to almost seven million people, asking them to consider Veganuary. Whilst, in the past, Oliver has stated that vegans “annoy” him, he seems to now be heavily backing the vegan, and meat-free, movement.

“Eating more veg is always going to put you in a good place. It’s good for your wallet, good for the planet and it can be really good for your health,” Oliver said. “So guys, sign up and unlock a delicious week of veggie cooking – I’ll be by your side every step of the way.”

The five-day challenge costs £2, and you can find out more about how to sign up, here.