Skip to content
A new Japanese kitchen sharing service gives travelers access to home kitchens in the nation’s major metropolitan areas. Called airKitchen Plus, the service was created to give tourists better access to vegan and vegetarian food in a nation where going out for a plant-based meal can pose difficulties. “We think it is big issue that vegans/vegetarians (especially foreign travelers) can’t enjoy Japanese food (especially outside of main cities) because there are not enough vegan-friendly restaurants,” said Yuta Murasa, co-founder of airKitchen Plus. “That’s why we started the service to help them enjoy Japanese food!” Although there are vegan restaurants in major cities like Tokyo, they are few and far between. And while many traditional dishes offered in restaurants are vegetable-based, such as nimono (simmered) vegetables, gohan (rice dishes), vegetable shabu-shabu, and miso soup, bonito fish flakes are an ingredient used in most stocks. Convenience stores throughout Japan — including Japanese 7-Elevens — offer some vegan convenience foods like umeboshi onigiri (rice balls with pickled plum) and fish sauce-free natto (fermented soybeans), but they don’t often provide the experience that many travelers seek. 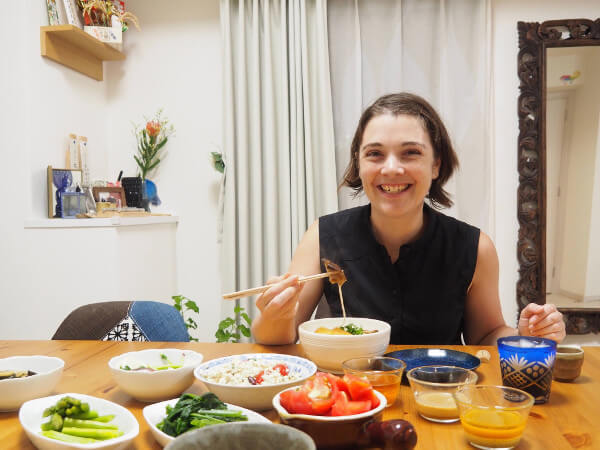 AirKitchen Plus allows travelers to book time at a home kitchen and eat a vegan or vegetarian meal with a local host. Murasa said in an email sent to LIVEKINDLY that he was inspired to create the service based on his own struggles with finding plant-based Japanese food. Although the Instagram showcases fish and meat, the website’s FAQ section notes that all food offered through the service is vegan or vegetarian. “I myself am a vegan and I’ve been traveling to Japan quite often. However, since I became vegan over a year ago, I need to adapt and research a lot and I have to admit, it’s not easy,” he said. “I once walked a few kilometers to a vegan restaurant in Nagoya to find out that it’s closed and ended up going to a nearby ramen restaurant to order a bowl of rice + pickled veggies for lunch instead.” The airKitchen Plus sharing service extends to many major cities including Tokyo, Kyoto, Osaka, Kagoshima, and Okinawa. For more information, visit the website. Image Credit: airKitchen Plus