The upcoming feature-length sequel to Australian animal rights pig-farming expose film, “Dominion“ has just released a new trailer and shared the celebrity narrators: none other than the vegan actor and actress, respectively Joaquin Phoenix and Rooney Mara. These two stars are reportedly in a relationship.

Those who watched the fellow vegan documentary, “Earthlings“ will be familiar with the voice of Phoenix, as he also narrated that film, which has inspired high numbers of people to adopt veganism.

The team behind Dominion shared a picture of Phoenix and Mara via their Facebook page, the pair is standing with the director of Earthlings Shaun Monson, who was announced as the newly appointed co-producer of Dominion. 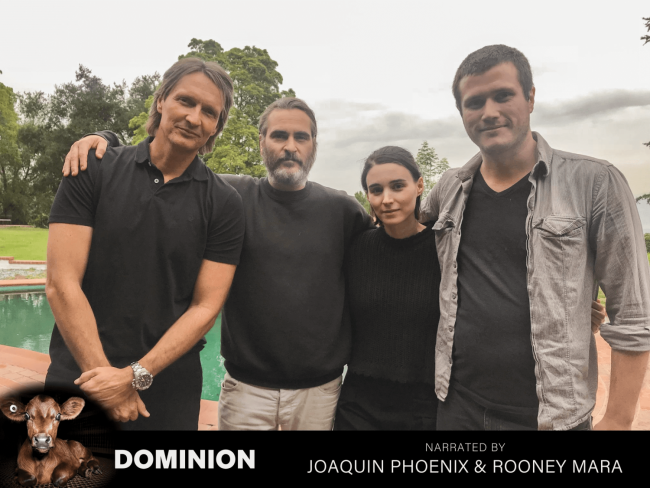 “We are thrilled to announce two of the narrators of Dominion: Documentary Joaquin Phoenix and Rooney Mara. We would also like to announce our new Co-Producer, Shaun Monson, creator of the renowned documentary Earthlings. Earthlings was a huge inspiration to us and we’re so excited to have Shaun on board, who personally reached out to Joaquin and Rooney as soon as he saw a short preview of Dominion,” The documentary’s Facebook page captioned.

“Chris Delforce [writer, producer, and director of Dominion and founder of organization Aussie Farms] met with the three of them in Los Angeles yesterday to record the narration. Two additional narrators have been confirmed but will not be recorded in time for the Australian premiere. As soon as we’ve recorded their narration we’ll announce their names and they’ll be added to the film for the subsequent online and international release.”

Last month, the premiere date of Dominion was announced. This hard-hitting documentary is due to hold its sold-out premiere on April 14th at the Dendy Cinema Opera Quays, courtesy of Aussie Farms, Animal Liberation NSW, and Sydney Pig Save.

This revelatory film has been in the making for more than 3 years. Using true footage taken by activists and from drones, Dominion will give viewers a deeper view into some of the agricultural ‘industry norms’, these practices will shock most people. Delforce’s intention lies in providing a viewable document that showcases the dark secrets behind food, cosmetics, clothing, and entertainment such as horse racing and rodeo.