The ad is run by animal rights organization, PETA, who says you can find it “at the intersection of Broad and Third streets in downtown Columbus, near the Ohio Statehouse and several upscale menswear stores”, right in the “heart of Columbus”.

This campaign comes at the perfect time for holiday shoppers, especially those considering buying woolen products this year which are so often a festive favorite. Phoenix’s campaign encourages people to reconsider their choices saying “Cruelty Doesn’t Suit Me. Wool Hurts. Wear Vegan.”

PETA stated, “Phoenix has teamed up with PETA to promote a #WoolFreeWinter and encourage the suit-wearing people of Columbus—one of the top cities for young professionals, according to Forbes—to choose luxurious wool-free suits on their next shopping trip.” Joaquin has also spoken out about why he doesn’t wear leather. 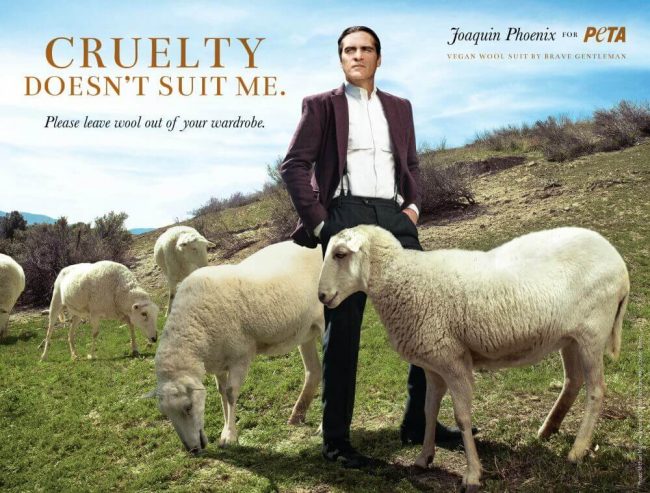 Many who are familiar with Phoenix’s work might be aware the actor is not known for giving interviews or being seen wearing suits. According to Phoenix’s interview with PETA, the organization sent him a video revealing the shocking truth of sheep-shearing, which was a big wake-up call for the actor.

“When PETA sent me that video of this undercover investigation of what happened in these shearing farms, that was really eye-opening, [T]he whole environment—it’s incredibly [violent]. … [T]he only option is to not use wool. That’s become abundantly clear,” said Phoenix.

Employees of the wool industry are paid based on how many animals they shear. Unfortunately, because sheep-shearers are often have low incomes and work long and exhausting hours many of the frustrated workers resort to taking their pent-up anger out on the animals. PETA videos have exposed workers mistreating sheep including kicking, punching, and stomping on them. This violence often results in the abused sheep being inflicted with severe injury or death.

Just like sheep raised for meat, these animals also end up at the slaughterhouse.

Phoenix isn’t the first celebrity to stand with PETA and speak out about animal rights. Previously, PETA campaigns have featured the likes of Alicia Silverstone (who posed naked to encourage a Wool Free Winter), Eva Mendes, Nicole Williams, Taraji P. Henson and many more.

Thankfully, wearing wool and living kindly don’t have to be mutually exclusive – synthetic; vegan-friendly alternatives to wool do exist and are often cheaper to produce too.

As part of the campaign, you can pledge, alongside Joaquin Phoenix and Alicia Silverstone, to never buy wool again.