Say what you will about Justin Timberlake’s Super Bowl LII’s Halftime performance, but one thing’s for certain: it was historic. And not just because he’s the only performer so far to headline the Halftime Show three times, but also because he was sporting a custom vegan menswear suit designed by vegan fashion designer and activist Stella McCartney.

“The pieces are inspired by the upcoming Autumn Winter 2018 collection,” McCartney wrote in her Instagram post that featured a snapshot of Timberlake at the biggest television event of the year.

McCartney is the daughter of former Beatle and longtime vegan Paul McCartney, and musician, photographer, and animal rights activist, the late Linda McCartney (1941-1998). 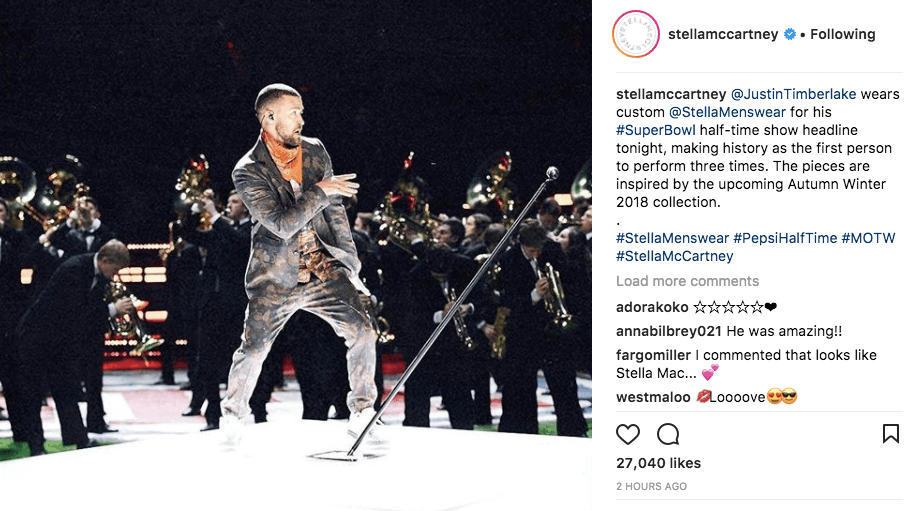 “A lot of designers don’t feel comfortable talking out against much and, as a whole, they’re not hugely controversial creatures on anything very important — it’s normally a controversy over a hemline or the color of the season,” McCartney said in a recent interview, noting that fashion, film, and the arts have all “sort of become one, so now we’re in an arena where designers have more confidence and have something to say — it’s definitely changing.”

McCartney is best-known for her minimalist and forward-thinking approach to fashion using vegan textiles, fabrics, and cutting-edge technology (she’s been working with a tech-spun vegan silk) as a welcome departure from traditional fashion design. McCartney recently held her fall show in Los Angeles to rave reviews.