Kat Von D has done it again. More amazing, vegan products are on there way. The tattooed scarlet who last year committed to moving her beauty range from cruelty free to totally vegan is well on the way, and we are very happy. KatVonD Beauty already have over 35 products in the #veganalert range, including lipsticks, perfume, foundation, eyeshadow and of course the Tattoo Liner to re-create her signature winged look.

Adding to the existing vegan and cruelty free brushes on offer, Kat Von D announced that a new set is on the way. Posting a picture of the new packaging, naturally black, which reads ‘Vegan’ and ‘Fur free artistry’ with the caption,

“So excited about launching an entire #crueltyfree and #vegan line of makeup brushes for @katvondbeauty! [coming soon!] I’ve teamed up with my #KvDArtistryCollective artists to create the most effective brush formations, using the highest grade synthetic fibers that mimic the same product distribution you would get from animal-based bristles.” 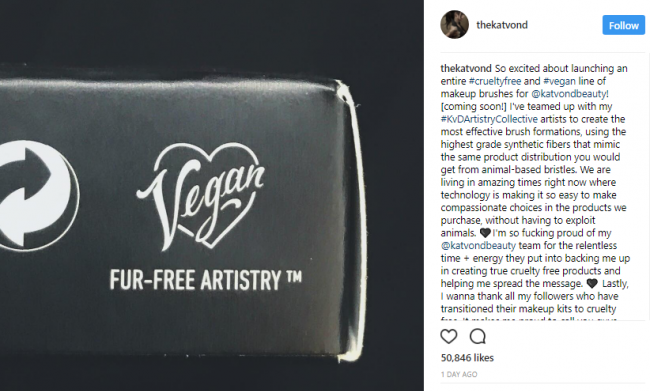 Unfortunately there’s no release date, yet, and no detail as to exactly what brushes will be featured in the new set. Although it does say it will be an ‘entire line of brushes’ so we’re hoping for everything from contour tools to eye and face brushes.

Von D is a musician, model and entrepreneur but is best known for her work as a tattoo artist, gaining fame on TV show LA ink. Working with Sephora to establish her make up range in 2008, Von D worked tirelessly to ensure all her products were cruelty free from day one. As a vegan herself the move to creating a totally vegan makeup range was a natural next step. 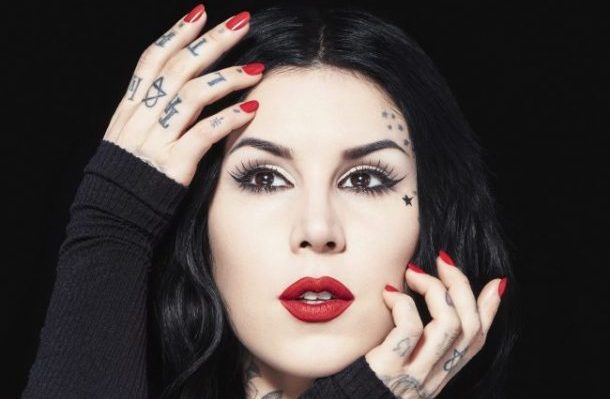 We also announced this week that the star is set to appear in an upcoming vegan music documentary, ‘Taking Note’, alongside Fall Out Boy, Enter Shikari and The Veronicas. The documentary aims to look at examples of vegan celebrities and musicians exploring the positive impacts that a vegan diet can have on the world including the environment and your health.

It seems Von D is continuing to raise awareness of the benefits of vegan based choices. We are very excited about her new range of vegan brushes and we totally agree with her sentiments on Instagram,

‘We are living in amazing times right now where technology is making it so easy to make compassionate choices in the products we purchase, without having to exploit animals.’