Kat Von D turned to veganism a decade ago to turn her life around, following an addiction to alcohol and drugs – ever since, she has been on a successful and unstoppable mission to create a kinder world for all. 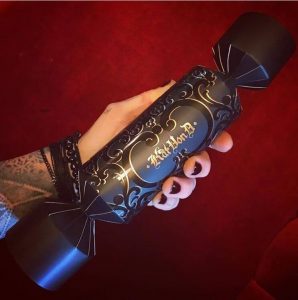 Aside from the matte black and shiny-patterned packaging, Kat Von D Beauty’s holiday crackers contain a Mini Tattoo Liner and a Mini Everlasting Liquid Lipstick – Santa Sangre. Everything made by Kat Von D Beauty is 100% cruelty-free and as of this year, completely vegan-friendly.

Kat stated in her caption “How rad are these @katvondbeauty holiday crackers?! ❤️ sorry US, these bad boys are only available exclusively at Sephora in the following countries [while supplies last]:” France, Italy, Spain, Poland, Portugal, Denmark, Sweden, Switzerland, Czech Republic, Greece, Romania, Serbia, Bulgaria, Turkey, Germany – will all be stocked with a limited supply of these vegan-friendly crackers.

If you are vegan or need to buy a Christmas gift for the favorite vegan in your life – look no further!

Earlier this year, Von D teamed up with Green Day to release a new vegan makeup product, launched a vegan lipstick to raise money for farm animals, launched vegan make-up brushes and has revealed snaps of her very own vegan shoe line!

As it seems, there’s nothing this tattooed scarlet can’t accomplish.