It’s almost impossible to look away. You know what’s happening. Still, it takes a few for it really to sink in. Was that the KFC colonel dancing with the maple syrup lady in some strange iteration of the iconic “Dirty Dancing” scene?

It was. And it is so, so dirty in all the wrong ways.

KFC has a new product it wants to sell you: The spot is for the fast food chain’s new chicken and waffles menu items featuring Mrs. Butterworth syrup. And it will do anything necessary to make you want some right now and forget all the reasons why you actually wouldn’t want to eat it. It’s the holiday season, after all, and KFC knows people are splurging on gifts and travel, which means many don’t have the budget for much else. But this is a treat you can afford, America. It’s new. It’s special. It promises you the “time of your life,” after all. It’s the Patrick Swayze to your humdrum Jennifer Grey life covered in thick, brown, syrup-like stuff. Except, it’s a total, terrible, bucket of lies. All of it. 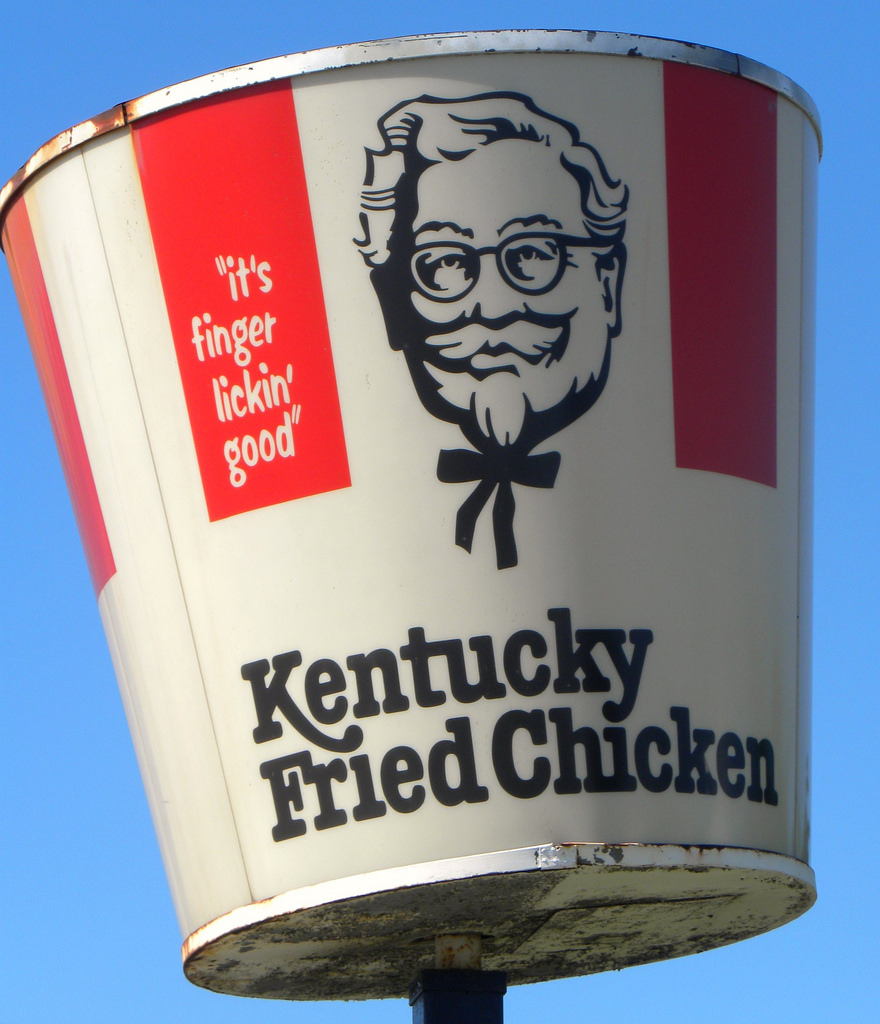 KFC’s recipes may be top secret but its main ingredient is not: millions and millions of tortured birds. And the chain doles them out by the literal bucketload. Chickens are the least protected livestock animals in the U.S., forced to endure unthinkable cruelty. Smart, curious, and nurturing, the life of a broiler chicken (that’s the industry term for chickens raised for meat) is worse than your worst nightmare. While the colonel waltzes across the screen in hopes to earn your dollars, the birds he’s selling you wouldn’t even know what to do with that much space. They’re used to being crammed into dark and crowded sheds. The smell of feces overwhelms them. So does the sound of tens of thousands of other birds shrieking at their horrific realities. They’re attacked and trampled by stressed-out neighbors. Diseases run rampant. Death comes soon, but not soon enough.

Despite a growing number of legislative victories for chickens, the vast majority of them still suffer greatly. They’re bred to have massive breasts for more of that white meat. They grow so big that their legs can’t support their body weight. If they do happen to make it out of a factory and to, say, a sanctuary, their lives are still painful and unnaturally shortened often by heart attacks–another side effect of being engineered to grow so big so quickly.

KFC and its parent company Yum! Brands have been highly criticized over lacking animal welfare standards. The leading chicken chain has been historically slow to adopt industry-wide practices. In October, a campaign that garnered more than half a million signatures urging KFC to improve its animal welfare standards, namely committing to slower-growing birds and to source from farms that provide more space, light, and a stimulating environment, was delivered to the chain’s Kentucky headquarters. No policy changes have been announced yet by the chain yet.

Earlier this year, though, KFC announced plans to trial a vegetarian option, and it recently launched two in Vietnam locations.

Mrs. Butterworth’s And When Syrup Is Not Syrup 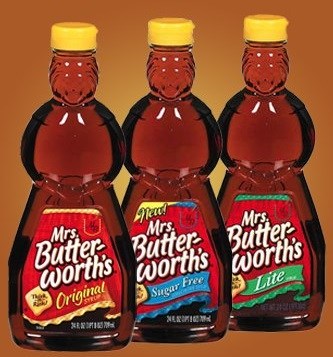 The first thing you need to know about Mrs. Butterworth’s “syrup” is that she’s not selling you maple syrup. She never was. Those two words — “maple” and “syrup” — can’t even appear together on the product’s packaging to imply that. The maple industry fought good and hard on this issue. As consumer tastes shifted in recent years toward cleaner and purer ingredients, many industries have become even more protective of their crafts. The booming “real” maple syrup industry is no exception. Mrs. Butterworth’s is maple-flavored syrup. And even that designation is a stretch.

Maple syrup, if you’ve ever had the real stuff, is a revelation. It’s nectar. (Well, technically, it’s sap, but when it hits your lips, you know it like you know the first sweet sip of lemonade in summer or winter’s first mugful of hot cocoa.) This is holy stuff. Nectar in the purest sense. In Hindu, they’d call it amrita — sweetness from the gods.

But there’s more (maybe actually less) to Mrs. Butterworth’s story than what’s not in her bottle. The website Something Awful ranks Mrs. Butterworth as the 5th worst corporate mascot of all time.

“Aunt Jemima takes all the heat for the racist ‘mammy’ stereotypes,” Something Awful notes, “but it’s the maple madam Mrs. Butterworth who really should be raising eyebrows. Butterworth is a coattail rider, trying to capitalize on the fat and sassy success of Jemima with her breezy post-slavery incarnation. Jemima dates back to the 19th century. She was (sort of) a real person. This Butterworth imposter doesn’t know what it’s like to limp out of the cotton field with raw hands and have to fix juleps for a sweaty old white guy guarding a secret recipe.”

Mrs. B, it turns out, is just as artificial as her sticky food coloring and flavor-enhanced contents. She forged her way onto shelves, attempting to glorify the suffering her competitor may have actually endured. It’s #MeToo in the worst possible way. And that’s even harder to swallow than the not-syrup. Is anything more terrible than pretending to be a former slave to make customers feel a sense of authenticity over a product that’s also pretending to be something it’s not?

Unlike Mrs. Butterworth, Colonel Sanders was a real person, Harland David Sanders. He did build an empire the hard way. After he died in 1980, the chain eventually rebranded Kentucky Fried Chicken as “KFC” in 1991. (Maybe the Colonel came back from the dead and told the chain Millennials will only be speaking in Internet slang in the future?) The Colonel returned from the dead in recent years played by a number of different celebrities in attempts to revive sales and interest in the chain.

Sanders was undisputedly old South. (The real South pretend Mrs. Butterworth appears to have escaped and then made her way north from to Vermont or Canada where she picked up maple tree tapping.) And Sanders was known to be a gentleman in the way Southern men seem to be at first glance — he donated millions to charities, including black churches, which his family says he sometimes attended. But there were also accusations that he used the “N” word and gave money to groups operated by the Klan. Snopes has debunked the latter, but whether or not he ever had associations with hate groups is unclear.

And then there are the millions of chickens he dropped into deep fryers as if that was a completely normal and gentlemanly thing to do. His business created such demand for chicken meat (which was not always as common as it is today) that it in part led to the controversial breeding practices and factory farming now standard in the industry.

But as Millennials stop buying buckets of Extra Crispy and prefer real syrup to the cheap plastic squeeze bottle, out comes the nice old white man with his brown friend —  who he’s literally lifting up like he just ended slavery with a plate of chicken and waffles — to remind today’s shoppers that they’re slipping, not pulling their Bucket quota. After all, when was the last time you had chicken and waffles anyway? Was that the syrup your mom used to buy? Can’t remember, can you? It’s all a ruse. The Colonel and Mrs. Butterworth are not dancing for you–they’re dancing around you and to distract you, and to convince you that these foods are all right. But neither one of them is telling you the truth. And that should tell you everything.

Get some cruelty- and racist-free vegan chicken and waffles here and here.