According to KFC Vietnam, the vegan options were introduced at the beginning of July in the Lunar calendar in order to cater to customers looking for vegan versions of familiar dishes. Though the KFC Vietnam website calls its new menu items as “vegetarian,” one post on American social aggregator and discussion forum Reddit shows that a banner displayed outside of restaurants advertises the three options as being vegan.

The new options include a vegan sandwich featuring grilled chicken breast that has been “harmoniously blended with natural ingredients,” served with fresh tomato, greens, and egg-free mayonnaise on a sesame bun. The rice bowl is a hearty mixture of fried and white rice combined with roast Korean seaweed, salad greens, and shredded vegan chicken salad. Additionally, a green salad with cucumber and cherry tomatoes is also available. 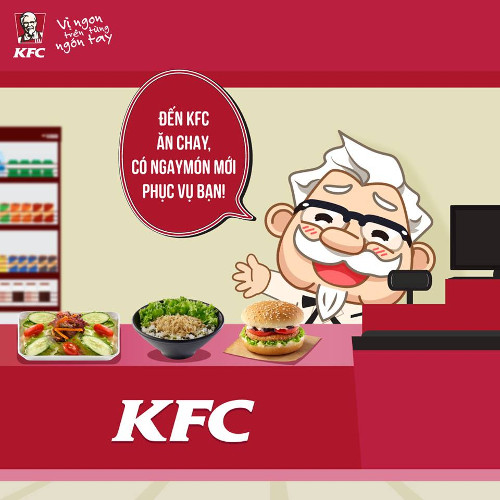 Last May, the popular fried chicken restaurant announced that it would trial vegetarian options in the UK before the end of the year in a bid to offer customers healthier options. “We know people are more passionate than ever about eating well, and we face a big challenge in shifting their perceptions of what we offer,” said Victoria Robertson Head of Food Innovation for KFC UK.

It seems as though the fast-food giant, which has nearly 19,000 locations across 119 countries, was not limiting itself to trialing healthier options in the UK alone. While the rising demand for vegan food is primarily dominated by the western market, recent data from the world’s largest market research resource, Research and Markets, notes that the Asia Pacific region is anticipated to be the fastest-growing market for plant-based meat before 2023.

According to the report, industrial growth and new innovations in food technology will play a key role in driving the demand for vegan meat. Several western vegan meat brands, such as Beyond Meat and  Impossible Foods, have already made their debut in China. Omnipork, a vegan pork created for Asian dishes, was launched last April by Hong Kong food startup, Right Treat.

KFC Vietnam will serve the vegan options for a limited time only at all locations throughout the country until the end of the Lunar month.