A new billboard is encouraging consumers to avoid seafood in Los Angeles’ restaurant-dense area of Koreatown.

The ad, created by PETA, shows an octopus alongside the words: “I’m ME, Not MEAT. See the Individual. Go Vegan.”

Several restaurants in the area are known for serving a dish called sannakji —  live octopus. The treatment of these animals has come under investigation by PETA, after it discovered chefs at the T Equals Fish restaurant were mutilating the animals whilst they were still alive.

Tracy Reiman, PETA’s Executive Vice President, explained the thought process behind the provocative ad in a recent statement. “Serving up the severed legs of an octopus while the rest of the animal languishes in agony in the kitchen is like something out of a horror movie,” she said. Adding that she hopes the ad might invoke reflection from customers. “There’s no difference between the pain that an octopus feels when being torn limb from limb and what a dog or a cat would feel in the same situation,” she explained. 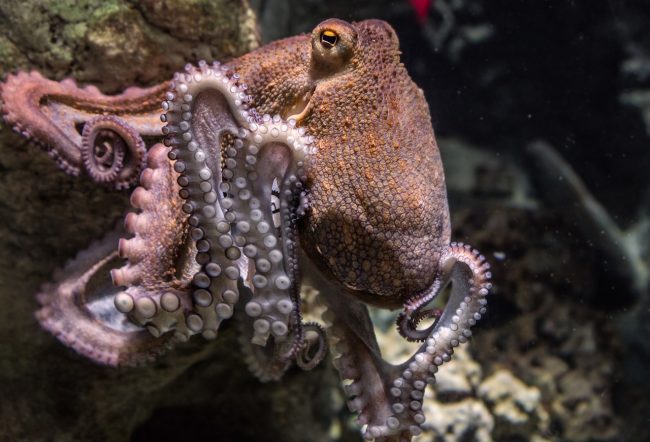 PETA also intends to place billboards in areas of Toronto which serve live octopuses. They are highly intuitive animals, believed to be the most intelligent invertebrates on Earth. They are also able to feel pain and solve problems.

PETA is known for publically sparking conversations about animal rights, targeting the mainstream audience, not just its vegan followers. Back in August 2017, PETA Australia asked the popular dating app, Tinder, to ask its users to remove all pictures taken with tigers, in a move against tourist-driven tiger farms.

PETA also opposed KFC’s ‘The Whole Chicken Advert’ last summer, pointing to the inappropriateness of suggesting that the ‘dancing’ animals were complicit in their own deaths.

As recently as last month, PETA showed that its ads work to promote health, as well as animal rights. Honoring Father’s Day, and attempting to encourage Little Rock, Arkansas, to shake its ‘fattest city’ title, PETA launched a campaign asking locals to convince their dads to go vegan. PETA placed advertisements on city buses that read: “This Year, Give Him the Gift That Could Save His Life: Help Dad Go Vegan.”