Kroger, the largest grocery chain in the U.S. by revenue, has announced it is to phase out the use of pig gestation crates in its supply chain by 2025. The animal welfare-driven commitment will affect more than 2,000 stores across 35 states.

International animal rights non-profit World Animal Protection have praised the move, which follows a recent animal welfare survey conducted by the organization. The study revealed that 70 percent of consumers think the conditions factory-farmed pigs are kept in is wrong.

“We are glad that Kroger has listened to the public and made this industry leading commitment to improve the lives of pigs,” said Alesia Soltanpanah, U.S. Executive Director of World Animal Protection.

“Mother pigs in gestation crates suffer terribly, but a more humane way to raise pigs is possible, as Kroger has committed to,” she continued. “We urge all major food companies to follow Kroger’s lead by phasing out gestation crates and encourage Kroger to share updates on its progress towards its goal.”

What are gestation crates?

The use of gestation crates on mother pigs is a prevalent practice in the factory farming industry.

According to the international animal rights organization The Humane Society of the United States (HSUS), pregnant sows are often kept in two-foot-wide cages. These cages are so narrow that the animal is unable to stand up and stretch her legs, let alone turn around.

The cruel treatment has an adverse effect on the mental health of pigs, who are by nature sentient, intelligent, playful, and social creatures. Immobilized pigs often turn to chewing on bars, lying down in a state of dejection, and waving their heads back and forth. 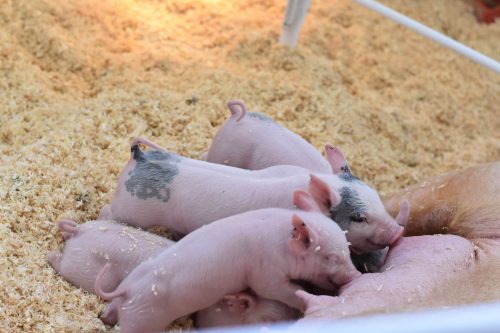 Forced to lie in their own waste, confined pigs are also vulnerable to a number of infections, leading to the indiscriminate use of antibiotics to prevent mass breakouts. In response to consumer concern, major retailer Walmart announced its commitment to end the use of gestation crates in 2015. Last January, Smithfield Farms, the world’s largest pork producer, ended the use of gestation crates 10 years after its initial promise.

The removal of gestation crates is not the only measure taken by Kroger to improve the lives of factory farmed animals.

Last March, the major retailer revealed it is to transition to a cage-free egg supply by 2025, in response to pressure from concerned customers. In addition, Kroger has stated that all domestic dairy suppliers must be enrolled in The National F.A.R.M. Program: Farmers Assuring Responsible Management. This is to ensure “best practices” are taking place with regard to the treatment of mother cows. The chain also requires all suppliers of animal-based foods to submit evidence of an annual “animal welfare” audit as part of its policy.

Kroger’s decision to stop the use of gestation crates may be in response to the popularity of the Prevent Cruelty California measure. The measure was added to the Californian ballot after the HSUS succeeded in obtaining more than 600,000 petition signatures in support of the measure. It aims to prohibit the confinement of egg-laying heads, breeding cows, and veal calves within the state and require all eggs, pork, and veal sold within the state to meet the same standards.

If passed, the law would be the strongest legislation against farm animal confinement in the world.