Alongside more than 150 different whiskeys, the restaurant will now offer the “bleeding” Impossible Burger (a plant-based patty served with with vegan cheese, dairy-free aioli, and a vegan pretzel bun), a meatless bolognese made with Impossible meat, and a vegan BBQ bacon chicken sandwich. The new options were specially created for the Las Vegas location.

“We’re the first Big Whiskey’s franchise to offer a vegan menu and we couldn’t be more excited,” Tony DePasquale, owner of Big Whiskey’s Las Vegas, told the local blog Vegans Baby. “We chose the Las Vegas market to debut the vegan menu because of the diverse needs and desires of the community.”

He added, “[we] really took our time in creating the menu, as the goal was to produce something as unique and special as this city. Las Vegans deserve the best and that is what we’ve worked hard at creating for them.”

DePasquale isn’t stopping there – he also aims to source his ingredients from more environmentally-conscious suppliers and find solutions to traditional harvesting ethics.

“We want our vegan customers to know we care about them and the issues important to the vegan community,” he said. “We didn’t just want to throw meatless and animal-free products on the menu and call it vegan.” 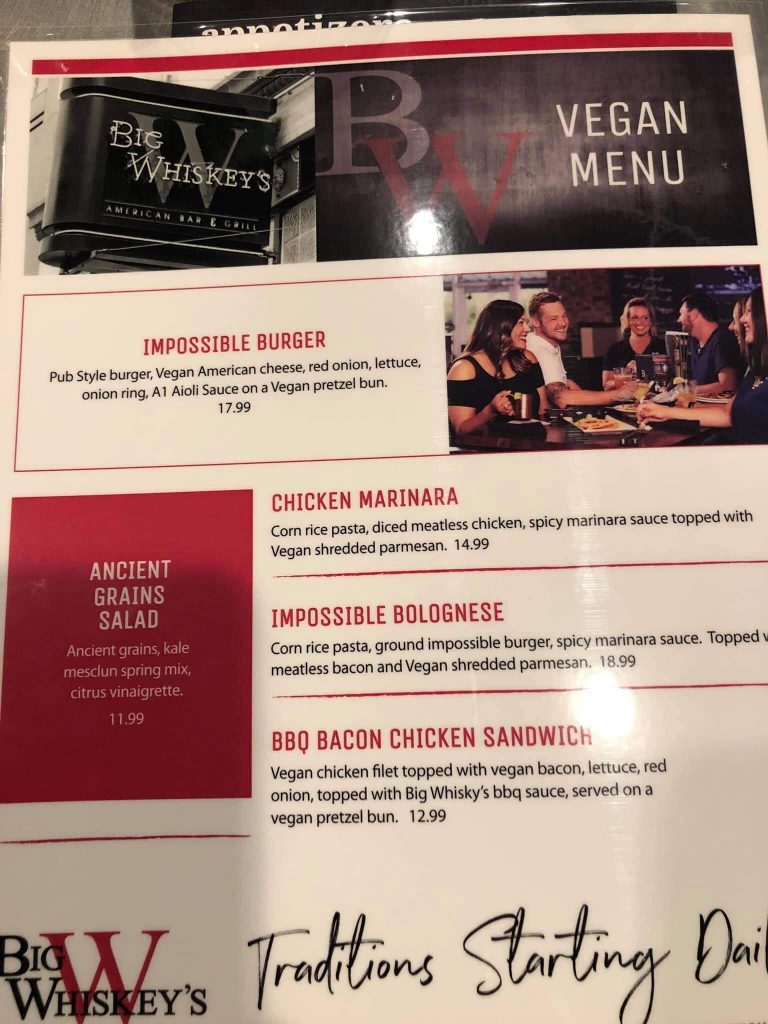 Big Whiskey’s joins a huge range of restaurants that are offering vegan food to Las Vegas locals and tourists alike.

The city is adept at catering for those looking for plant-based options; from global street food – like that served at VegeNation’s two locations – to unique fine dining experiences. At Black Out, the entire plant-based menu isn’t revealed until after customers have finished eating…in the pitch black.

The city is also home to Nevada’s first all-vegan drive through, VegeWay Burger, which opened in 2016. Created by Kenny Chye, owner of Veggie House in Chinatown, the restaurant offers vegan Asian-inspired fish tacos and Vietnamese Bahn Mi sandwiches, as well as an extensive menu of burgers.