There’s something special about New York City pizza. Many of the recipes have been perfected through generations of pizzaiolos, and native New Yorkers know that the local pizzeria goes far beyond a place to grab a slice. For many, they represent a place that feels like a home away from home where one can grab a seat and chat with friends, neighbors, and strangers over good food that’s been made with love.

Vincent Rotolo, founder of Good Pie pizzeria in downtown Las Vegas, has captured the essence of the NYC pizzeria. The restaurant promises guests a space where they can indulge in Brooklyn-style pizza. According to Rotolo, an NYC native, his love affair with making pizza began at age 12, when he joined his brother Salvatore in working at John’s of Bleecker Street, a historic restaurant founded in 1929 by Italian immigrant John Sasso. “My heart was always in Italian cooking – home-cooked Italian food,” Rotolo said.

Though he eventually left his job at John’s to pursue a career as a waiter at well-regarded restaurants throughout  the city, NYC pizza culture had left a distinct mark on his soul – or, in his words, he had been bitten by “the pizza bug.” It’s what he describes as a deep appreciation for the craft, the fragrances, the passion for making a quintessential Italian-American dish.

“It’s beyond good pizza,” Rotolo said. It’s also a matter of what he calls the “intangibles;” an amazing work culture, unique identification, and a core philosophy that comes through in everything the restaurant does. At Good Pie, Rotolo has accomplished just that. 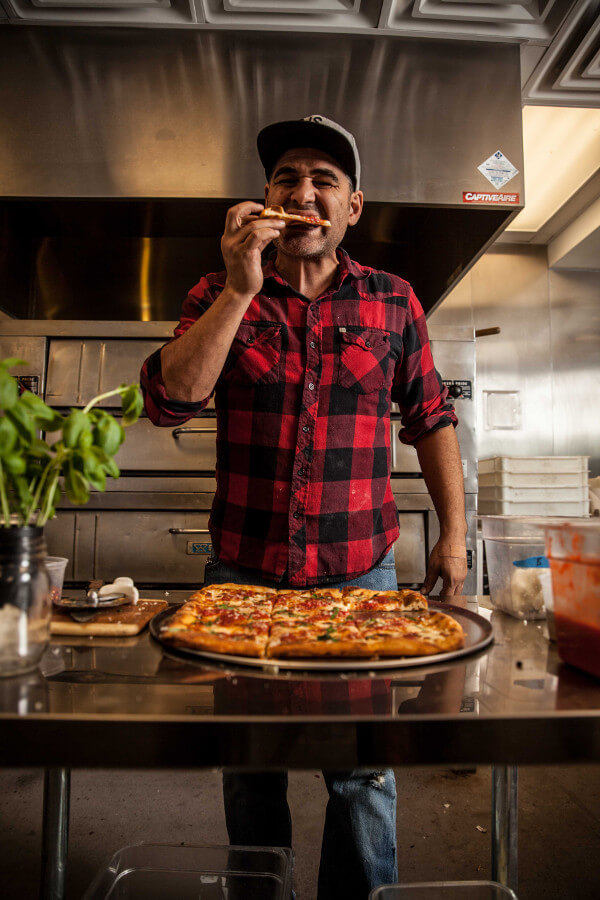 Eventually, Rotolo found himself moving from NYC to Las Vegas in order to help care for his aging parents. He opened Good Pie in downtown Las Vegas, which he describes as having a vibe uncanny to NYC of the late 1980s – the ideal location for setting up a family-style pizzeria just outside the iconic Sin City. At Good Pie, customers can find styles of traditional oven-fired pizza that are a beloved part of NYC and Long Island pizza culture. “It’s in my DNA,” Rotolo said.

Rotolo has a pizza knowledge that goes far beyond how to make a delicious pie – he also knows the history like the back of his hand. He shared the story of how the modern grandma-style pizza is a love letter to the Italian immigrant grandmothers who lovingly served rustic, handmade pizza to their grandchildren in the mid-20th century. When those children grew up and entered the pizza-making business, Rotolo said that pizzaiolos began offering their own take on the homemade pie.

the man who inspired a new generation of pizza-makers

More than anyone else, Rotolo credits Paulie Giannone, creator of the gourmet Neapolitan-style pizzeria Paulie Gee’s which has locations in major cities throughout the country. Giannone worked in IT for 30 years and had no prior experience in pizza-making, aside from being a lifelong fan. He eventually quit his career to open the first Paulie Gee’s, a full-service, old-school Neapolitan pizzeria that combined traditional wood-fired oven methods of cooking with innovative toppings and a wide variety of vegan options. According to Rotolo, Giannone inspired a new wave of underdog pizzaiolos like himself, who did not come from a family with generations of Italian-American pizza-makers.“He proved that if he could do it, anyone can,” Rotolo gushed.

@goodpielv’s Vinny Vegas in the house. Can’t thank you enough for coming to hang out and bust your ass.

While not all options at Good Pie are vegan, Rotolo has taken the utmost care in creating pizzas, stromboli, and other options found at any NYC pizzeria. The inspiration behind the plant-based menu, Rotolo said, comes from his girlfriend Roxie, an ethical vegan. The other part is giving customers what they want. “I wanted to make a delicious plant-based dish that meat-eaters will love and make vegans go crazy,” Rotolo said. To him, the vegans and vegan-curious clientele of downtown Las Vegas were an underserved community that he was happy to feed. “I want to nurture the community and share the pastimes of the neighborhood I grew up in.”

Rotolo maintains that though his vegan dishes are popular with all customers, they are a constant work in progress as brands launch innovative new products. He had high praise for NUMU, a Brooklyn-based vegan cheese brand created specifically to withstand the high temperatures of a wood-fired oven. No other vegan cheese brand can stand up to the heat – or handle being reheated in an oven after being displayed in the pizza case – like NUMU, Rotolo said.

Rotolo works equally as hard to present customers with high-quality, unique vegan options that they won’t find anywhere else. His vegan meat-lover’s pie features three types of plant-based meats and is so good, even omnivore customers stop by just to get a slice. When it came to developing his vegan stromboli, Rotolo took notes from three vegan employees. Feedback also comes from omnivore customers who are simply tempted by how good the vegan options look.

Rotolo is entirely transparent with his customers and talks to them as if they were family. “Eating at the restaurant should be like eating at someone’s house for Thanksgiving,” he said.

Dedicated to his customers, Rotolo says that “I’ll never put profit over pizza. It’s harder, but it can be done.” There is no doubt that Rotolo’s warm, friendly, personality and knack for listening truly makes his restaurant stand out in a market saturated with pizza chains. It’s about so much more than pizza… But also, it’s really Good Pie.