The students of basketball legend LeBron James’ new school, I Promise, have a sweet reason to look forward to the first day of school. The animal rights non-profit, PETA, has offered to supply the school with vegan ice cream and non-dairy beverages to celebrate opening day.

James, who is departing from the Cleveland Cavaliers to play for the Los Angeles Lakers, is leaving far more than an impressive athletic reputation in his home state of Ohio. He opened I Promise this week in his hometown of Akron, Ohio, to serve as a public school for at-risk youth. 240 third and fourth graders make up the inaugural class, though the goal is to build up to grades one through eight by 2022.

Supported by the LeBron James Family Foundation in partnership with Akron Public Schools, the I Promise School is a far cry from the average elementary school. However, James maintains that it is still a public school, not a private or charter school. All students receive free breakfast, lunch, and snacks, as well as a free bicycle. Parents are also offered the opportunity to take GED classes and participate in job placement programs. What’s more, James promised to cover the public college tuition for students who attend I Promise and successfully graduate from high school. 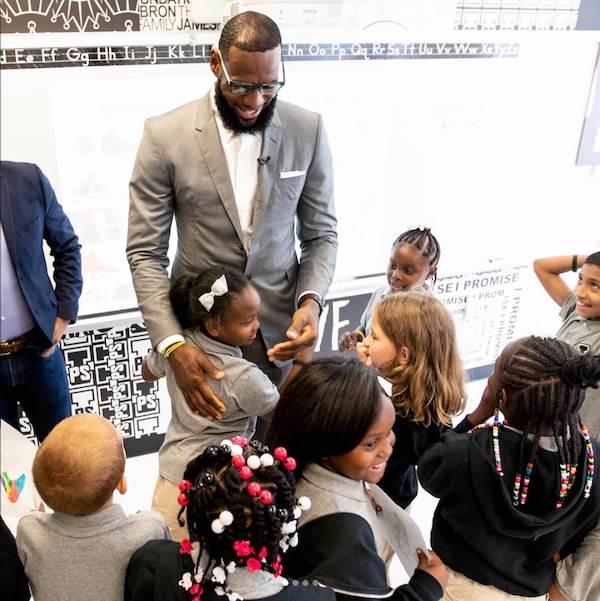 To celebrate LeBron’s generosity and welcome the incoming class, PETA sent a letter to the NBA star. Senior Vice President Lisa Lange wrote, “We’d love to sweeten the deal for the first day back to school by donating vegan ice cream to all I Promise students and offering almond and soy beverages to encourage them to pick and roll with a healthy diet, ensuring that dairy-free, animal-friendly, pro-environment, and lactose-intolerant individuals aren’t left on the bench.

Lange continued to describe the benefits of a plant-based diet for both athletes and young people and concluded the letter by stating, “You’ve set a tremendous example here, not only for others who have the opportunity to give back but also for schools in general. We hope others follow in your giant footsteps and pivot to an all-around healthy lifestyle that’s accessible to everyone.”

There has been no word as to whether the school accepted the offer, but there’s no doubt a little vegan ice cream could help brighten the students’ day.