American director and lead singer of the rap-rock band Limp Bizkit, Fred Durst, is a vegan (has been since around 2013, according to his Twitter), and in a recent Instagram message, he requested that LIVEKINDLY’s CEO, Jodi Monelle cook him up some vegan treats.

Whilst cooking is not LIVEKINDLY’s main forte, we’re more into vegan media these days, for Durst, we reckon we could perhaps get our schedule “Re-Arranged” and whip up a vegan meal or two. There’s plenty of plant-based recipes to choose from, after all. Perhaps something with a meaty mushroom? or a classic BLT? Rumour has it, the singer likes “rollin‘” in the vegan restaurant, Crossroads Kitchen, in Los Angeles. So maybe some Stinging Nettle Agnolotti?

Probably a little advanced for us, we’re writers after all. But with a little bit of “faith” and some help from Wicked Healthy, we could maybe knock up some vegan banana blossom with coconut and chile, easy. 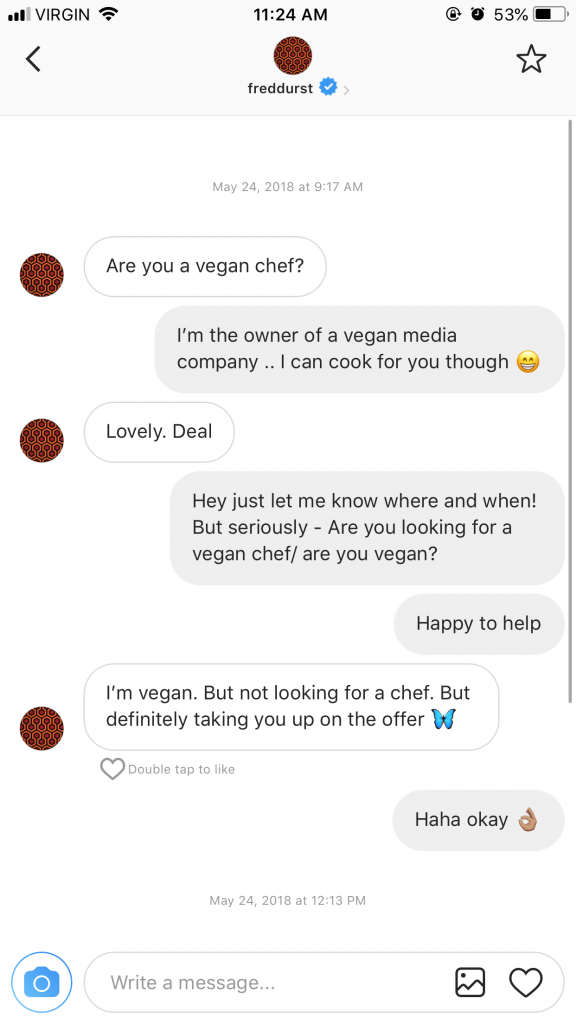 Jokes aside, celebrities such as Durst reaching out to vegan media is a good sign. The world is changing, and many musicians, actors, YouTubers, sportspeople, and television personalities are at the forefront of the plant-based movement.

Recently, Scottish footballer, Charlie Mulgrew revealed he has adopted a vegan diet in order to prolong his career — a lifestyle change which proved successful in fellow footballer Jemaine Defoe. “The way life expectancy is going, [the vegan diet] could definitely be something in the future for a lot of players,”  Mulgrew told Press Association Sport. “[Veganism] is getting bigger and bigger, and it is going to be massive soon,” he added.

A-Listers, such as Zac Efron, have also been raving about the plant-based lifestyle and the benefits it brings. “It’s been brilliant,” the actor enthused to Teen Vogue in March. “It’s been great for my exercise, and great for my routine.” Cate Blanchett and Jimmy Fallon, whilst neither are vegan, have also been giving the meat-free movement some positive press. On Fallon’s show, Blanchett fed the host a veggie burger from New York’s award-winning Superiority Burger. “I swear to God, [this] is the best goddamn burger, Superiority Burger, you will ever have in your life,” Blanchett raved.

So, yeah, we’ll knock up a vegan dish or two for Limp Bizkit’s Durst, but let’s all keep the favour going – invite a meat-eater ’round for dinner and feed them something so delicious they can’t believe it’s animal product free (or you could cheat with an Amy’s Kitchen ready meal? They’ll never know).